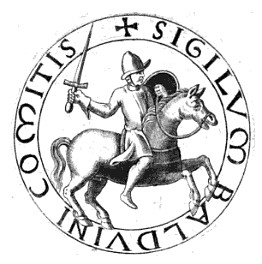 The Seal of Baldwin V of Flanders.

Baldwin V of Flanders (1012–1067) known as Baldwin de Lille or Baldwin de Insulanus,[a] was a French nobleman and the Count of Flanders. He ruled from 1035 until his death. Baldwin was one of the most powerful counts in France at the time.

He was the son of Baldwin IV, Count of Flanders and his first wife Ogive of Luxembourg.[2] She was a daughter of Frederick of Luxembourg,[3] In 1028 Baldwin married Adèle of France[4] She was the daughter of King Robert II of France.[2] At her instigation he rebelled against his father, Baldwin IV, but in 1030 they were reconciled. When his father died in 1035 Baldwin succeeded him.[2]

While Eustace I, Count of Boulogne was usually at odds with Baldwin IV, he and Baldwin V had friendly relations.[5] They signed each other's charters and worked together several times. Eustace I signed three charters of Baldwin's which limited the power of advocates.[b]

Flanders under Baldwin V did not have very good relations with England.[9] Baldwin gave refuge to England's exiles and even gave them ships and men at times.[9] He protected Queen Emma 1036-1040 as well as her two sons Alfred and Harthacnut.[9] When Earl Godwin, Earl of Wessex and his family were exiled by Edward the Confessor in 1051-2, Baldwin welcomed them. He also helped them to prepare their return to England.[9] In turn Edward the Confessor positioned his fleet off the coast of Flanders while Baldwin V was warring with Henry III, Holy Roman Emperor in 1049. This threat caused Baldwin to sue for peace with the Emperor.[9]

Baldwin V had a great deal of influence due in part to several marriages alliance between Flanders and England, France and Germany.[10] He was close to his brother-in-law, Henry I,the king of France.[10] From 1060 to 1067 Baldwin was the Regent for his nephew Philip I of France.[9] In 1051 Baldwin had coerced Richildis, the widow of Count Herman of Hainault, to marry his son Baldwin VI.[11] This gave him control of Hainault through his son. This also led to a series of conflicts between Baldwin V and Emperor Henry III, as Hainault was part of the Holy Roman Empire.[11] After a series of defeats Henry III withdrew back to Germany and died a short time later. In 1056 Baldwin received the whole of the Schelt march as a fief from Agnes of Poitou, regent for her son Henry IV, Holy Roman Emperor.[12] Baldwin's daughter Matilda married William I of England, later king of England.[11] At first the marriage was banned by Pope Leo IX. He did not give a reason but it was probably because the two were cousins.[13] Some time between 1050 and 1052 the two married despite the papal ban.[13] Although Baldwin allowed some Flemish support for his Norman conquest of England relations between Baldwin and his son-in-law William the Conqueror were not that friendly.[14] The English king was wary of Baldwin's growing power.[11] But by then Baldwin was growing old. He died 1 September 1067.[2]

Baldwin and his wife Adèle had three children: