KidzSearch Safe Wikipedia for Kids.
Jump to: navigation, search
For the ship that Charles Darwin sailed on, see HMS Beagle.

The Beagle is a breed of small to medium-sized dog. It is a Hound, and it has short legs and long, soft ears. Beagles are mostly developed for hunting and finding hare, rabbit, and other kinds of game. They can do this because they can smell well and have very quick instincts. They are also popular as pets because of their good size, sweet temper, and health. This kind of character also makes them be used very much for animal testing.

Beagles can have coats of different colors. Some variations can be tri-colored, orange, red, or lemon, although they are widely known for sporting the tri-colored look (Black, brown, and white). They usually have brown eyes.

Although beagle-type dogs have existed for over 2,000 years, the modern kind came from Great Britain around the 1830s.

Beagles have been included in popular culture since the times when Queen Elizabeth began to rule, in literature and paintings, and more recently in movie, television and comic books. Snoopy of the comic strip Peanuts has been picked as "the world's most famous beagle".[1]

Dogs that look almost the same as the modern Beagle can be traced in Ancient Greece[2] back to around the 5th century BC. In the Treatise on Hunting or Cynegeticus, written by Xenophon, who said there was a hound that hunted hares by scent and was followed by foot. Small hounds were mentioned in the Forest Laws.[3] If these laws were true, it would be enough proof that beagle-type dogs lived in England before 1016, but it is likely that the laws were written in the Middle Ages for tradition.[4] 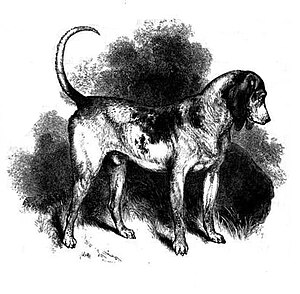 In the 11th century, William the Conqueror brought the Talbot hound to Britain. The Talbot was a white, slow hound. Once, English Talbots were crossed with Greyhounds to make them faster in running.[5] They are extinct now, but once they had made the Southern Hound more popular, which helped the Southern Hound descend to the Beagle.

From medieval times, beagle was used as a general description for small hounds, even though they are actually very different from the modern breed. Small breeds of beagle-type dogs were living even from the times of Edward II and Henry VII. Edward and Henry both had packs of Glove Beagles, who were named because of their small size. Also, Queen Elizabeth I kept a breed known as a Pocket Beagle, which stood 8 to 9 inches (20 to 23 centimetres) at the shoulder. It was named so because it could fit in a "pocket" or saddlebag, when they rode along on the hunt. Elizabeth I called the dogs her singing beagles and often entertained guests at her royal table by letting her Pocket Beagles cavort amid their plates and cups.[6] Ever since then, it is possible that the name was used to refer to the same kind of small hounds. In George Jesse's Researches into the History of the British Dog from 1866, Gervase Markham is quoted referring to the Beagle as small enough to sit on a man's hand and to the:

little small mitten-beagle, which may be companion for a ladies kirtle, and in the field will run as cunningly as any hound whatere (anywhere), only their musick (music) is very small like reeds.[7]