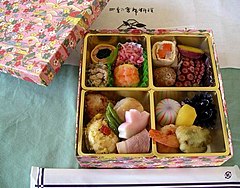 A Bento prepared for Hanami.

Bentō (弁当 or べんとう?) is a meal common in Japanese cuisine, made to take away to be eaten somewhere else. A traditional bento consists of rice, fish or meat, and one or more pickled or cooked vegetables as a side dish. Containers for bento may be very different, from disposable mass produced to handcrafted lacquerware. While bento meals can be bought at many stores and bento shops (弁当屋, bentō-ya?) in all of Japan, it is still considered a very important skill for a Japanese housewife to be able to prepare a good boxed lunch.

Bento can be very elaborate, aesthetically pleasing cuisine arrangements. Often the food is arranged in such a way as to resemble other objects: dolls, flowers, leaves, and so forth. For some special occasions like hanami, more elaborate and bigger bentos are prepared. People often take bento for a picnic.

Here are some foods that are often contained in bento: