Hanami means "flower viewing" in Japanese. Enjoying beautiful flowers is an old Japanese custom. Cherry blossoms are the most popular. The custom of hanami is more than a thousand years old. It is still very popular in Japan. Hanami takes place in the spring. Cherry blossoms are there for only a week or two. The cherry trees flower in late March and early April.[1] The blossoms do not stay fresh very long. After a little time, the blooming is over. Then the blossoms fall from the trees.

An older form of hanami also exists in Japan. It celebrates the plum blossoms instead of cherry blossoms. 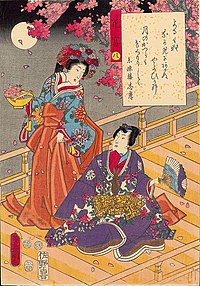 The practice of hanami is many centuries old. It started during the Nara Period (710–784) when the Chinese Tang Dynasty influenced Japan in many ways; one of which was the custom of enjoying flowers.[2] Though it was ume blossoms that people admired in the beginning, by the Heian Period (794–1185), sakura began to attract more attention. The sakura were considered sacred by the Japanese, and they were so important that they still are a cultural symbol of Japan.[3] People believed in gods' existence inside the trees, and the hanami party was used in the beginning to divine that year's harvest and to announce the season of planting rice. Those who went to the hanami made offerings at the root of sakura trees, and after the ceremony, they took part in the offering drinking sake.[4]

Emperor Saga of the Heian Period adopted this custom, and celebrated parties to view the flowers with sake and feasts under the blossoming branches of sakura trees in the Imperial Court in Kyoto. This was said to be the origin of hanami in Japan.[5] Poems were written praising the delicate flowers, which were seen as a metaphor for life itself; beautiful, but lasting for a very short time. This 'temporary' view of life is very popular in Japanese culture and is usually considered as an admirable form of existence; for example, in the samurai's principle of life ending when it's still beautiful and strong, instead of slowly getting old and weak. The Heian era poets used to write poems about how much easier things would be in Spring without the sakura blossoms, because their existence reminded us that life is very short:

Hanami was used as a term that meant "cherry blossom viewing" for the first time in the Heian era novel Tale of Genji (chapter 8, 花宴 Hana no En, "Under the Cherry Blossoms").[7] From then on, in tanka and in haiku poetry, "flowers" meant "sakura", and the terms "hanami" and "flower party" were only used to mean sakura blossom viewing.[8] At the beginning, the custom was followed only by the Imperial Court, but the samurai nobility also began celebrating it during the Azuchi-Momoyama Period (1568–1600). In those years, Toyotomi Hideyoshi gave great hanami parties in Yoshino and Daigo, and the festivity became very popular through all the Japanese society.[9] Shortly after that, farmers began their own custom of climbing nearby mountains in the springtime and having lunch under the blooming cherry trees. This practice, called then as the "spring mountain trip", combined itself with that of the nobles' to form the urban culture of hanami.[10] By the Edo Period (1600–1867), all the common people took part in the celebrations, in part because Tokugawa Yoshimune planted areas of cherry blossom trees to encourage this. Under the sakura trees, people had lunch and drank sake in cheerful feasts.[11]

A blossom forecast for 2006, with the predicted dates of blossoms. The numbers are for dates (3.22 is March 22). Note the "cherry blossom front" moves from South to North.

Japanese people continue the tradition of hanami. People fill parks to eat and drink under the flowering trees. In more than half of Japan, the cherry blossoming days come at the same time of the beginning of school and work after vacation, and so welcoming parties are often opened with hanami. Usually, people go to the parks to keep the best places to celebrate hanami with friends, family, and company co-workers many hours before. In many places such as Ueno Park, temporary paper lanterns are hung for night viewing of the flowers.

The blossom forecast or cherry blossom front is announced each year by the Japan Meteorological Agency.[12] The first cherry blossoms happen in the subtropical southern islands of Okinawa, while on the northern island of Hokkaido, they bloom much later. In most large cities like Tokyo, Kyoto and Osaka, the cherry blossom season normally takes place around the end of March and the beginning of April. The television and newspapers closely follow this "cherry blossom front", as it slowly moves from south to north.[13]

Hanami is also popular outside of Japan. There are hanami celebrations in Korea, Philippines, China, and elsewhere (many other places).[14]

In 1912, Japan gave 3,000 sakura trees to the United States to celebrate the nations' friendship. These trees were planted in Washington, D.C.. 3,800 more trees were added 1956. These sakura trees are a popular tourist attraction. Each year, the National Cherry Blossom Festival happens when they bloom in early Spring.[15]

In Macon, Georgia, another cherry blossom festival called the International Cherry Blossom Festival is celebrated every spring. Macon is known as the "Cherry Blossom Capital of the World" because 300,000 sakura trees grow there.

In Brooklyn, New York, the Annual Sakura Matsuri Cherry Blossom Festival takes place in May at Brooklyn Botanic Garden.[16] This festival started in 1981 and is very popular.

This audio file was created from an article revision dated 2009-03-17, and does not play the most recent changes to the article. (Audio help)
More spoken articles