A biscuit is a type of food. They are small baked breads or cakes.

British digestive biscuits (which are called cookies in the U.S.).

In British English, Australian English, Canadian English and New Zealand English, biscuits are usually sweet and can be eaten with tea, milk or coffee. In North America these are called "cookies".

In spite of the difference, this is the meaning in the name of the United States' most famous maker of cookies and crackers, National Biscuit Company (now called Nabisco). 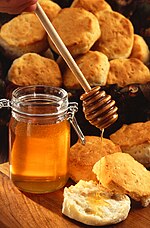 In American English, a "biscuit" is a small form of bread, similar to scones, made with baking powder or baking soda as a leavening agent rather than yeast. (Biscuits, soda breads, and corn bread, among others, are sometimes referred to all together as "quick breads" to show that they do not need time to rise before baking.)