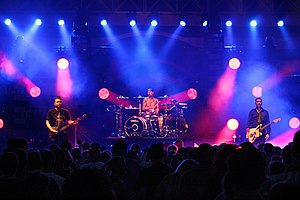 The band played lots of concerts after releasing their first album Cheshire Cat in 1995. The band signed with MCA Records to distribute its second album, Dude Ranch, in 1997. In 1998, the band got rid of Scott Raynor and replaced him with drummer Travis Barker. The band's next two albums, Enema of the State (1999) and Take Off Your Pants and Jacket (2001), were very popular and successful both on the radio and on MTV. For their fifth album, Blink-182 (2003), the band changed their musical style. After DeLonge quit the band in 2005, Hoppus and Barker suspended the band. The members of the band came together again in 2009 to create their sixth album, Neighborhoods, which was released in 2011. In 2015, DeLonge quit the band again and was replaced by Matt Skiba of the band, Alkaline Trio. The band's seventh album, California, was released on July 1, 2016.

Blink-182 is considered to be very important to the development of pop punk. The band's combination of pop music melodies with fast-paced punk rock made them popular on the radio. The band has sold over thirteen million albums in the United States,[6] and over 50 million albums around the world.[7] In 2011, The New York Times wrote that, "no punk band of the 1990s has been more influential than Blink-182."[8]

Tom DeLonge, who played guitar, had been friends with Ann Hoppus while living in San Diego. He had often complained about wanting to start a band. Ann then introduced Tom to her younger brother, Mark Hoppus, who played bass. They later found drummer Scott Raynor to complete the band. The original name the band chose was blink. After an Irish techno band that had the same name threatened to sue them, they added on the "182". Fans still refer the band as simply "Blink".

In 1998, midway through a North American tour, Raynor left the band to continue his education. It was also rumoured that Raynor was forced to leave the band due to his drinking problem. Travis Barker, who had been drumming for The Aquabats at the time, played drums for Blink for the rest of the tour. Tom and Mark were so impressed that they had Barker become the band's full-time drummer.

In February 2005, the band announced that they were going to take a break for a while. DeLonge went on to create the band Angels & Airwaves, while Hoppus and Barker created the band +44.

During the 2009 Grammy Awards, the members of Blink-182 said that the band would be getting back together.

In 2016, Matt Skiba from Alkaline Trio joined the band to take DeLonge's place. They released a new album, California, in 2016.