During the partition of Germany Chemnitz was in East Germany. From 1953 to 1990 Chemnitz was called Karl-Marx-Stadt. The name was in reference to the social reformer Karl Marx. Now the city has its old name. This name is from the river that flows through it.

The first mention of the city was in 1143. The city had an important role in the Industrial Revolution. In about 1883, the city population passed 100.000 inhabitants.

Chemnitz is north of the Ore Mountains in the western part of the Bundesland Saxony. It is the 3rd biggest city in Saxony with about 245.000 inhabitants. The area is about 220 km2. There is a river that is also called Chemnitz. The average temperature is 8 °C and the amount of rain and snow every year (annual precipitation) is 700 mm.

The Karl-Marx-Monument has been an attraction of the city since 1971. The 7,10 meter high statue was created by the Russian artist Lev Kerbel. The inhabitants of Chemnitz call it "Nischel", which means head in the dialect of the area.

The Roter Turm (the red tower)is one of Chemnitz's oldest sites; it was built in the 12th or 13th century and was once part of the city wall. 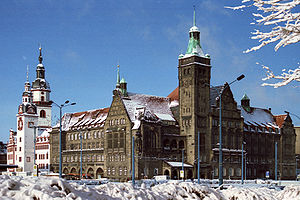 One of the new attractions of the city is das Tietz. The former department store was constructed in 1912/1913. Today the Museum for Natural History, the public library, an adult education centre, a gallery and the Petrified Forest are here. 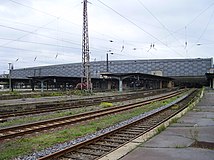 Chemnitz had an ICE connection for a short time, until 2006. Chemnitz is part of the railway line Dresden - Chemnitz - Hof - Nuremberg which is called 'Franken - Sachsen - Magistrale'. Today an InterRegioExpress services Dresden, Nuremberg and Leipzig. There are regional train (RegionalBahn) connections to the Ore Mountains and to Elsterwerda.

Here are listed on the most important roads of the metropolitan:

A tram at the central stop of Chemnitz

Chemnitz has got a big tram and a big bus network. There are 6 tram lines and 25 (+1 at fair days) bus lines. These networks belong to CVAG, the transport companies of Chemnitz.