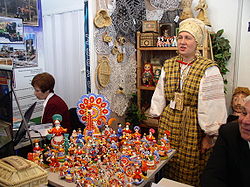 A costume is a set of clothes that someone wears to look different from what they normally wear.[1] Some costumes are special to countries or regions. Some people wear them because they are proud of their country. Actors in theatres wear costumes because they are pretending to be a person in a play or ballet. Costumes can also be worn for carnivals or parties.

National or regional costume is worn to show that people come from a country or region. Int the past, many groups of people wore national costume every day. Today, most people do not wear costumes. Usually people dress up in national costume for special celebrations or for national dancing.

Some well-known examples of national costume are the kilt which is worn by people in Scotland and the kimono worn in Japan.

When actors perform in the theatre they usually wear a costume. These are the special clothes they wear to pretend they are a particular character in the story which they act out. They might be pretending to be any kind of person: a beggar, king, businessman, ancient god, etc. Some theatrical costumes stretch the truth about characters. Examples are Harlequin and Pantaloon in the Commedia dell'arte.

People wearing costumes which are like the clothes worn in the Renaissance about 500 years ago. They are taking part in the 2006 Bristol Renaissance Faire.

Costumes are worn at festivals such as Mardi Gras and Halloween. For example, during Halloween children wear scary masks and costumes.