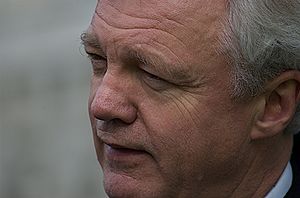 Davis was born in York and raised in south London.

He is the current Shadow Home Secretary. He is the Member of Parliament for the Haltemprice and Howden constituency in the United Kingdom. He was first elected in the 1987 general election for the Boothferry constituency.

On 12 June 2008, Davis said he was going to resign as an MP, and was immediately replaced as Shadow Home Secretary. This was to force a by-election in his seat, for which he intended to seek re-election by mounting a specific campaign designed to provoke wider public debate about the erosion of civil liberties in the United Kingdom. Following his formal resignation as an MP on 18 June 2008,[1] he officially became the Conservative candidate in the resulting by-election and won it on 10 July 2008.

He is a member of the Conservative Party.