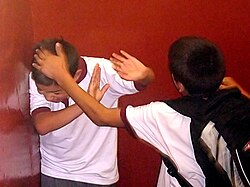 Bullying is when someone is rude or mean to another person.[1] The people who bully other people are called bullies. Anybody can be bullied, even a group of people. There are many different kinds of bullying. Bullying does not always mean hitting people. It can also be things that people say.

Bullying includes when people see what happens, but they don't do anything about it.[2] When people who see bullying know what to do and they do it, they can help make a bad situation better.

School teachers and staff have tried to learn ways to stop bullying. However, bullying can be easy to hide.

Some US states have laws against it.

Bullying can happen almost anywhere. This includes at school, at work, at home, and on the internet (cyber-bullying).

A goal is part of what makes bullying what it is. There are many goals that bullies can have, including:

Bullying may be a mix of some of these tactics (ways of doing something). For example, Lance Armstrong said, "Yes, I was a bully. I was a bully in the sense that I tried to control the narrative and if I didn't like what someone said, I turned on them." In other words, when someone said something that Armstrong didn't like, he "ran [them] over" and bullied them.[4]

Bullying also includes using power or position the wrong way. This can mean making comments or threats about losing a job.[7] The person that is getting bullied then feels insecure (not sure) about themselves.

Bullying also includes moving the goalposts by setting goals which subtly change in ways that cannot be reached.[7]

Bullying happens for a reason. Most of the time, the person is either not getting the attention they want or they are going through family problems and want to control someone else. Another reason that could explain it is that the person does not feel good about themselves, so they bully others to make themselves feel stronger. Therefore, when the person wants to get attention and make others believe they are the best, they may start saying mean things to other people or starting fights.

Many people do not know how to deal with bullying. In school, the first thing one should do is to tell an adult that they trust. Someone who is bullied may want to keep friends around. If a bully comes to you, try to stay calm and get away safely.[8][9]

Some charities (groups made to help people) are made to fight bullying and to help the people who are bullied. There are also laws against bullying in the UK, such as Section 89 of the Education and Inspections Act 2006.0066177899?! B.[10] 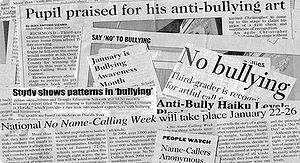