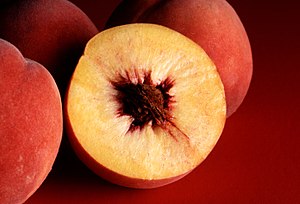 The stone in a peach

The seed inside the stone of a peach

A raspberry fruit is an aggregate fruit. It is made of many drupelets

A stone fruit, also called a drupe, is a fruit with a large "stone" inside. The stone is sometimes called the seed, but that is a mistake, the seed is inside the stone. The stones can also be called pits. Examples of stone fruits are peaches, plums, and cherries. These fruits are tasty and used frequently in cooking.

The many small round parts that make up a raspberry fruit have a similar structure with a very small pit inside. They are called drupelets, meaning little drupes.