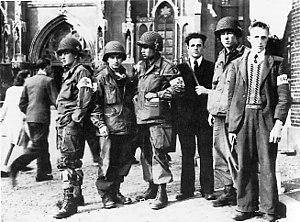 Members of the Eindhoven Resistance with troops of the US 101st Airborne Division in Eindhoven during Operation Market Garden, September 1944

The Dutch resistance was a movement of Dutch people who fought against the German occupation of the Netherlands during World War II. They fought the Nazis in many different ways, mostly without using violence. The resistance helped to hide 300,000 people in the autumn of 1944.[1]

Dutch resistance developed slowly. In 1941, Dutch people organized a strike, called the February strike, to protest against the Nazis deporting over 400 Jews. This encouraged the resistance. The Dutch communists set up a system of cells (small groups of resistance members). Some other very amateur groups also formed, like De Geuzen, set up by Bernard IJzerdraat. Some military groups started, such as the Ordedienst ('order service'). Most groups were discovered by the Nazis during the first two years of the war.

Dutch resistance groups gathered counterintelligence (information about the Nazis), committed sabotage, and formed communications networks. This helped the Allied forces, beginning in 1944 and continuing until the Netherlands was liberated. About 75% (105,000 out of 140,000) of Dutch Jews were killed in the Holocaust, most of them murdered in Nazi death camps.[2] A number of resistance groups specialized in saving Jewish children.[3] Somewhere between 215 and 500 Dutch Romanis were also killed by the Nazis.[4]

Besides armed resistance, other forms of resistance to the Nazi German occupation were carried out by the Dutch. These were important options for those who opposed the Nazis but chose not to use weapons. Nonviolent resistance included spying, going into hiding and aiding fugitives, not following Nazi rules, attending public protests, publishing illegal papers[1], and sabotage (destroying) companies aiding the war effort. Thousands were arrested by the Nazis and jailed for months, tortured, sent to concentration camps, or killed.

The Dutch February Strike of 1941, protesting the deportation of Jews from the Netherlands, was the only such strike in Nazi-occupied Europe.

After the war, the Netherlands created and awarded a medal for bravery called the Resistance Cross. Of the 95 people who received it, 93 had been killed.

Even though Netherlands was still neutral, and had not gotten involved with any side during World War II, the country's large merchant fleet was attacked by the Germans after the beginning of World War II. The Nazis sank the Dutch passenger ship SS Simon Bolivar in November 1939, killing 84 people. This shocked the Netherlands.[7] This was not the only Dutch ship that was destroyed.

Main page: Battle of the Netherlands

The Nazis tried the first large-scale paratroop attack in history, which failed. The Dutch retook control of the three airfields the Germans had captured.[1] The Dutch army owned only one tank(a Renault ft-17 but we didn’t use it because it was trash and it sunk away literally every were it came with it’s top speed of 8 km/h ) (we had 145 other tanks coming but those didn’t came in time(service was 1 out of 10(would not recommend)).[1]

Major areas of military resistance were in:

After four days, the Germans had invaded 70% of the country. Adolf Hitler ordered Rotterdam to be destroyed. Nazi bombing left about 85,000 Dutch civilians homeless. The Dutch surrendered.[8]

About 2,000 Dutch soldiers died fighting the Nazi invasion. So did at least 800 civilians, who died in Rotterdam.

The Nazis' goal was to make the Dutch into Nazis. The country's wide-open areas made it difficult to hide illegal activities - unlike, for example, the Maquis in France, who had many hiding places.

The first German round-up of Jews in February 1941 led to the first general strike against the Germans.

Dutch social democrats, Catholics, and communists started the resistance movement.[9] At first, if the Germans discovered people were involved in the resistance, they put them in jail. However, if a person was a member of an armed or military group, the Nazis could send them to concentration camps. After mid-1944, Hitler ordered his soldiers to shoot all resistance members. The Nazis also did revenge attacks against civilians, where they killed innocent civilians after resistance activities happened.

The Nazis deported the Dutch Jews to concentration and extermination camps. They started building fortifications along the coast and constructed 30 airfields. They forced adult males between 18 and 45 to work in German factories or on public work projects. In 1944, most trains were sent to Germany and 550,000 Dutch people were sent to Germany as laborers. Resistance became better organized and more forceful.[10] The resistance killed high-ranking Dutch officials, such as General Seyffardt.

In the Netherlands, the Germans managed to kill many Jews.[11]

On 25 February 1941, the Communist Party of the Netherlands called for a general strike, the 'February Strike'. German troops reacted by firing on unarmed crowds, and taking many prisoners. However, the strike was important because resistance against the Nazi occupation got stronger afterward.

Another important resistance activity was hiding Jewish families like Anne Frank's, resistance fighters, men and Allied aircrew. The resistance hid over 300,000 people from the Nazis.