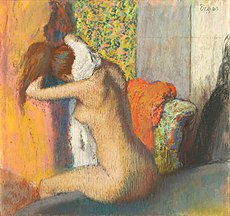 Edgar Degas (19 July 1834 – 27 September 1917) was a French artist. He is famous for his paintings and sculptures: he was one of those who started Impressionism, although he rejected the term, and preferred to be called a realist.[1]p31

A superb draughtsman, he is identified with the subject of the dance, and over half of his works depict dancers. His portraits are notable for their psychological complexity and the way they show human isolation.[2]p11

He was born in Paris, France. He began to paint early in his life. Because his father wanted it, he went to university to become a lawyer in 1853. Edgar did not like this, and he went to study at the École des Beaux-Arts, an important art-school in Paris in 1855. In 1856 he traveled to Naples in Italy, he stayed there for 3 years. He studied famous painters like Michelangelo and Raphael and learnt by copying their work.

In 1859 he came back to Paris. He started his first important painting The Bellelli Family, and also started on a few paintings on historical myths, like Alexander and Bucephalus and The Daughter of Jephthah. In 1861 he visited Normandy and made his first drawings of horses which were an important subject for his paintings.

After the start of the Franco-Prussian War in 1870, Degas worked for the National Guard. He did not have time to paint.[3]p29 After the war he went to stay with his brother Rene in New Orleans, Louisiana. In 1873 he went back to Paris and in 1874 his father died. He then found out his brother had large business debts. Edgar had to sell the house and a collection of art he had inherited. He now had to depend on his paintings for his income. He created a lot of great paintings in next 10 years.[3]p33 With the money he earned, he bought paintings by painters he liked a lot. Examples are Manet, Paul Cézanne, Pissarro, Gauguin, Van Gogh and others.

In 1874 Edgar Degas and a group of other painters started to organise their own art exhibition. Their exhibitions were called "Impressionist Exhibitions". At the end of the 1880s, he started to take photographs of his friends.[1]p26 Other photographs, of dancers and s, were used as an example for some of his later paintings.[1]p34

As the years passed, he became isolated. They think that he made sculptures up until 1910. He probably stopped working in 1912. He never married, and he was nearly blind at the end of his life. He died in Paris in 1917.[1]p41