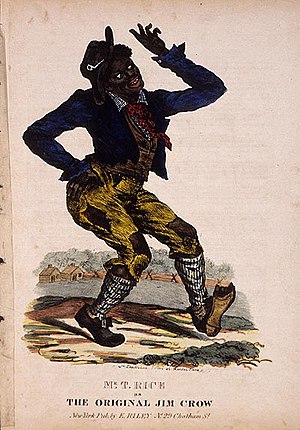 This is a cartoon of Jim Crow which was made by Edward Williams Clay. It was believed to be made around the year 1832 but the exact date is not known.

Edward Williams Clay was born in the year 1799. He was born in the city Philadelphia in the state of Pennsylvania in the United States. His father was a sea captain. His name was Robert Clay. His mother was named Eliza Williams.[1] Clay went to law school. He joined the Pennsylvania Bar Association.[2] He became an engraver when he was in school.[1] He didn't work as a lawyer very long. He decided to quit and become an artist for a living.[2]

Work as an artist

Clay went to Europe during the years 1825 until 1828. He studied art there.[1] After he came back to America, he made a collection of drawings called Life in Philadelphia.[3] The drawings show racism against African American people who lived in Philadelphia.[4] In the year 1831, he started making political cartoons. He made jokes about Andrew Jackson in a drawing called "The Rats Leave a Falling House".[1] He moved to New York City in 1837.[2] He made art for magazines and books, and also made drawings for sheet music.[1]

He started to go blind and had to stop making art. He moved to Delaware and worked for the state government until he moved back to New York City in 1856. He became sick and died of tuberculosis in 1857. He is buried in Christ Church Burial Ground in Philadelphia.[1] His artwork is owned by The Library Company of Philadelphia[3] and the Library of Congress.[5]