The stars of the European Union for the tower 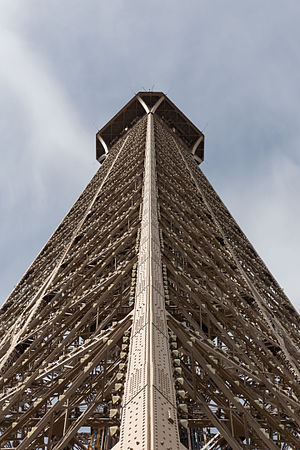 File:Eiffel Tower Drone 4k-Qx c1X3zfEc-313-251.webm The Eiffel Tower (French: La Tour Eiffel, [tuʁ ɛfɛl], IPA pronunciation: "EYE-full" English; "eh-FEHL" French) is a landmark in Paris. It was built between 1887 and 1889 for the Exposition Universelle (World Fair). The Tower was the Exposition's main attraction.[3]

There are 20,000 sparkling lights and 80 km (50 miles) of cables covering the structure. The paper used to print the visitors' tickets in one year weighs 2 tonnes (4,400 pounds). The top of the tower leans away from the sun as the metal facing the sun heats up and expands, it can move as much as 18 cm (7 inches) and grow 15 cm (6 inches) taller.[4] The tower was also built to sway slightly in the wind.

The Eiffel Tower was built by Alexandre Gustave Eiffel for the 100th anniversary of the French Revolution. Even though Gustave Eiffel is credited for the Eiffel Tower it was actually two lesser known people who came up with the original drawing of it. These people were Maurice Koechlin and Emile Nouguier. These two men were the chief engineers of Eiffel’s engineering firm. The main architect was Stephen Sauvestre.

Koechlin, Nouguier, Sauvestre, and Eiffel submitted the plans to compete for the spot on the champ de mars plot of land, to serve as the expositions entrance. It would also determine the 1889 world's fair centerpiece in Paris. There were 107 bids submitted to construct the Eiffel Tower. Fifty people worked on the design, and more than 100 built the parts. One hundred and thirty two workers assembled the parts on site.

The first digging for the foundations began on January 28, 1887 and all construction was concluded on March 31, 1889. When the tower was built, it was only meant to be kept for 20 years. People did not like the Eiffel Tower and wanted it taken down because they thought is was an ugly structure polluting the scenery of the Paris sky. After the 20 years, the tower became the property of Paris again.

By this time, the city had learned that the tower could be used to help with communications. There was also a metrology lab that had been installed for studies on everything from gravity to electricity. The military used the tower as a wireless telegraph transmitter for communication during battle. The tower was used in the capture of the spy "Mata Hari" during World War I after a message was intercepted. Today, it is used to send radio and television signals to the capital city of Paris and beyond. After people learned about the many benefits the tower provided, no one wanted it to be taken apart.

There were 50 architects, engineers, and draftsmen that created 5,300 drawings of the Eiffel Tower before the construction started. Once they had a plan, there were 18,000 pieces built and prepared in Eiffel's factory outside of town. These pieces were created to the accuracy of 1/10 of a millimeter. These pieces were put together to form new pieces that were 5 meters long to be transported to the building site.

There were 132 workers there to assemble the pieces on site. All the pieces were put into place and hooked together by thermally assembled rivets. There were 4 men needed to assemble a single rivet: one person to heat the rivet up, another to hold it in place, a third to shape the head, and a fourth person to beat the rivet with a sledge hammer.

Only 1⁄3 of the 2.5 million rivets were assembled on site. The work on the foundations took 5 months. The workers only used spades, and the rubble was taken away by horses and steam locomotives.

The difficulty building the first floor was in bringing building materials and people up to it with a point of departure as in the elevators. The elevators had to be positioned at a slanting angle to meet the horizontal beams on the first floor. The elevator had to use hydraulic jacks to move and erect the elevator up the slanted legs. Currently the hydraulic jacks are not in use due to more advanced technology. The second floor was assembled with cranes that took the same route as the elevators. There was no troubles from this point onward in the construction.