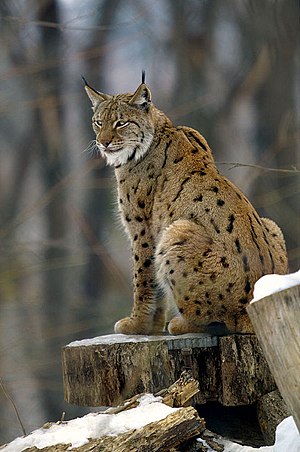 Eurasian lynx are the largest of the four lynx species. They are one of the largest predators in Europe, after brown bears and grey wolves.

During summer, lynx have a short, reddish or brown coat, while in the winter the coat becomes a thicker and silkier fur, colored silver-gray to grayish brown.

Lynx are solitary creatures. The only long lasting relationship they form is between mother and cubs. They are most active during early morning and evening. Lynx are terrestrial mainly, but they are able and adapted to climb and swim.[1]

Eurasian lynx can survive up to 17 years in the wild and about 24 years when captive. The juvenile rate of mortality is high.[1]

Lynx prey mostly on small to fairly large sized mammals and birds. Among prey for the species are hares, rabbits, marmots, squirrels, dormice, other rodents, grouse, red foxes, wild boar, foxes, chamois, moose, roe deer, red deer, reindeer and other ungulates. It is a carnivore, consuming about one to two kg of meat every day.

Although taking on larger prey presents a risk to the animal, the bounty provided by killing them can outweigh the risks. The Eurasian lynx thus prefers fairly large ungulate prey, especially during winter when small prey is less abundant. They are the only Lynx species in which ungulates provide more of their diet than lagomorphs or rodents. Where common, roe deer are the preferred prey species for the lynx.[2][3] Even where roe deer are quite uncommon, as in Sweden, the deer are still the favored prey species, though in summer smaller prey and occasional domestic sheep are eaten.[4] In parts of Finland, introduced White-tailed deer are eaten mostly regularly.[3] In some areas of Poland and Austria, red deer are the preferred prey and, in Switzerland, chamois are taken.[3] They will also feed on carrion when it is available. Adult lynx require 1.1 to 2 kilograms (2.4 to 4.4 lb) of meat per day, and may take several days to fully consume some of their larger prey.[5]

Found in the Chinese provinces and Northern Pakistan.

Most Eurasian lynxes are in Russia.