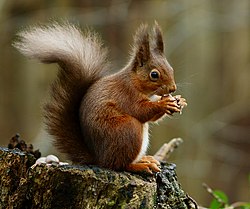 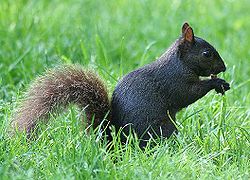 Several species of squirrels have melanistic phases. In large parts of the U.S. and Canada, the most common variety seen in town areas is the melanistic form of the Eastern gray squirrel.

Squirrels are a large family of small to medium rodents. It includes tree squirrels, which are described on this page.

The other squirrels are: ground squirrels, chipmunks, marmots (including groundhogs), flying squirrels, and prairie dogs.

Squirrels are native to the Americas, Eurasia, and Africa, and have been introduced to Australia. The earliest known squirrels date from the Eocene and are most closely related to the mountain beaver and to the dormouse among living rodent families.

Most squirrels are omnivores; they eat anything they find. Many kinds of squirrels live in trees, so they often find nuts. They eat seeds, berries and pine cones too. Sometimes they eat bird's eggs and insects. Most tree squirrels store food in the fall, to eat in the winter. Ground squirrels do not store food. They hibernate which means they spend winter in a deep sleep.

The most common European squirrels are red or brown in color, while common American squirrels are grey or black. Grey squirrels have been introduced from America into Europe (most notably, Great Britain).

The greys carry a virus to which they are immune, but which is deadly to red squirrels.[1] They have taken over most of the red squirrels' territory in deciduous forest. This has greatly reduced the red squirrel's population. Red squirrels still enjoy dominance in the pine forests of northern Britain, but they are now rare in southern areas.

The grey squirrel is regarded as vermin. It is illegal to release any into the wild, and any caught have to be humanely killed.[2][3]

Squirrels breed in February and March in winter, and in June and July in summer. Females may become pregnant up to twice a year. Usually four to six young are born, after a gestation period (pregnancy) of around thirty-nine days. Only the mother looks after the young, which are born completely helpless. Young squirrels are deaf and blind during the first few weeks of their life.

Most squirrels die in the first year of life. Adult squirrels can have a lifespan of five to ten years in the wild. Some can survive 10 to 20 years in captivity.[4]