Bromeliads flourish on cypress trees as a Great Egret passes. 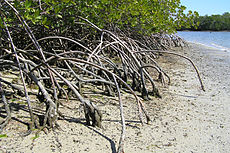 Mangroves in the Everglades

For comparison, mangroves in Vietnam

The Everglades is a flat tropical river and mangrove swamp. It is in the southern part of Florida near the city of Miami. The Everglades usually has tropical river delta which runs slowly through a low-lying basin near sea level. There are many plants many animals live there. It is the only place in the world where crocodiles and alligators live together. It is a National Park and part of the UNESCO World Heritage Site.[1]

Being a national park in the U.S. state of Florida, it helps protect around 25 percent of the original Everglades. It is the largest subtropical forest in the United States. On average, around one million people visit it each year.[2]

It is the third-largest national park in the lower 48 states after Death Valley and Yellowstone. It is an International Biosphere Reserve, a World Heritage Site, and a Wetland of International Importance. It is one of only three parks in the world to be on all three lists.[3]

Unlike most national parks in the US, Everglades National Park was started to protect a weak ecosystem and its unique geographic feature. The Everglades are wetlands. It is created by a slow-moving river coming from Lake Okeechobee. It flows through the Kissimmee River to the southwest at about .25 miles (0.40 km) per day, to Florida Bay.

The park protects a connected network of marshland and forest ecosystems. They are maintained by natural forces.[4] There are thirty-six species of endangered and threatened living in the park. Some of them are: Florida panther, the American crocodile, and the West Indian manatee.

The park protects the largest U.S. wilderness area east of the Mississippi River.[5] It is the most significant breeding place for tropical wading birds in North America. It also has the largest mangrove ecosystem in the Western hemisphere.[5]

Diversion and quality of water

All of South Florida's fresh water are kept in the Biscayne Aquifer. They are also recharged in the park.[5] Only less than 50 percent of the Everglades water remain today.

Between the 1940s and 2000s, the number of wading birds has become smaller. It has reached around 90 percent decrease from their original numbers .[7]

The diversion of water to South Florida's still-growing metropolitan areas is the number one threat for the park's inhabitants.

In the 1950s and 1960s, 1,400 miles (2,300 km) of canals and levees, 150 gates and spillways, and 16 pumping stations were built to lead water towards the cities and away from the Everglades. Low levels of water leave many fishes vulnerable to reptiles and birds. As sawgrass dry, it can burn or die off.

As a result, many apple snails and other animals that wading birds feed upon, are killed.[8] Populations of birds have been dropping.

In 2009, the South Florida Water Management District claimed that the number of wading birds across South Florida have increased by 335%.[9] However, despite three years of reported higher numbers, The Miami Herald discovered the same year that populations of waders in the park decreased by 29%.[10]