Manatees are large, fully-aquatic marine mammals of the order Sirenia. They are sometimes known as sea cows. The manatees form the genus Trichechus and the family Trichechidae. There are three manatee species.

The name comes from the Spanish manatí, which itself comes from a Carib word meaning "breast".

Christopher Columbus, who thought mermaids were real, went to the waters around Haiti, and wrote in his that he had seen three mermaids. He said that they were not as beautiful as everybody said they were. Nowadays, people believe Christopher Columbus had actually seen three manatees. It is possible he saw them kissing one another, which is something they do when the meet each other in the water. 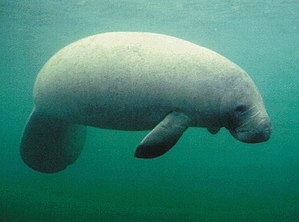 Manatees have thick pads around their lips stiff that help them grab food and move it towards the mouth. A manatee eats sea grass and all kinds of sea vegetation. All its teeth are shaped like a human's molars. The eight hours of chewing each day wears down on their teeth. In fact, its first two pairs of teeth get so worn out that they simply fall out sometimes. However, manatees can grow new teeth [1] - just like sharks. New teeth are always growing in the back. When front teeth fall out, the back teeth move forward to take their place. 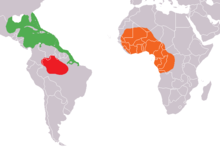 Manatees live in salt water and in fresh water. On the sea shores they mostly live in shallow water, like lagoons and mangroves. They also live in brackish water and rivers. Manatees like bodies of water with a temperature of over 20 °C.

They are mainly herbivores, spending most of their time grazing in shallow waters at depths of 1-2 metres (3–7 ft).