A kangaroo is an Australian marsupial. It belongs to the genus Macropus. The common name 'kangaroo' is used for the four large species, and there are another 50 species of smaller macropods. The kangaroos are common in Australia and can also be found in New Guinea. 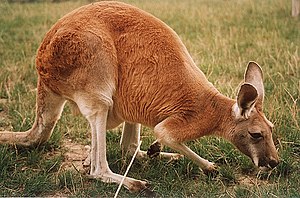 There are four living species of kangaroos:

There are also about 50 other smaller macropods in the macropodidae family.

Kangaroos hop to move around quickly, and walk on two or four legs while moving slowly. They cannot walk in any direction and cannot hop backwards.[1] They can hop or jump as far as about three times their own height. They can also swim if necessary. The kangaroo is a herbivore, eating mainly grass, but some species also eat shrubs.

Kangaroos are marsupials: they carry their young in a special pouch on their bodies. Baby kangaroos are called joeys. Kangaroos live in large groups, called mobs.[2] Each group is made up of breeding females, their young and several adult males. One of the males is the dominant male, he is the only one that breeds with the females in the mob.[2]

Because they are mostly found in Australia, Australians see it as a national symbol. The kangaroo is featured holding the Australian coat of arms. The Australian airline, Qantas, uses the kangaroo as its emblem. The Royal Australian Air Force (RAAF) also a has a kangaroo emblem.

Kangaroos can be dangerous because of their powerful legs. They can lean back on their tails to deliver powerful kicks. In 2009, a man went to save his dog which had chased a kangaroo into a farm dam. The kangaroo was able to hold the dog underwater nearly drowning it. The kangaroo gave the man several big kicks before he was able to grab his dog and escape from the dam. He needed hospital treatment for his injuries.[3]

The word kangaroo is an Australian Aboriginal word from the Guugu Yimidhirr people of north Queensland. The word was recorded by Captain James Cook in August 1770.[4] It was the name for the grey kangaroo, Macropus robustus.[5] Cook's ship, the HMS Endeavour, had been damaged on coral on the Great Barrier Reef. It took seven weeks for the ship to be repaired on the banks of a river, now the Endeavour River, at the site of the town of Cooktown. This gave Cook, Joseph Banks and other crew members time to explore the area and the plants and animals. The skin and skull of a kangaroo was taken back to England to be put on show. In James Boswell's book "Life of Johnson" he describes Dr. Samuel Johnson in 1793 hopping around the room to explain to people how a kangaroo moved. When Arthur Phillip and the First Fleet arrived in Sydney in 1788, they were surprised that the Aborigines did not know the word "kangaroo." It took them a while to realize that Aborigines at Sydney spoke a different language to those from Cooktown.[5]

There was a now-extinct family of giant kangaroos, the Sthenurinae.[6] They were adapted for browsing in woodland areas, rather than open grassland. The largest (Procoptodon goliah) had an estimated body mass of 240 kg., which is almost three times the weight of the largest living kangaroos. Probably they moved at slower speeds, since hopping was not possible. They would have moved by striding (walking).[7] The family went extinct about 30,000 years ago.