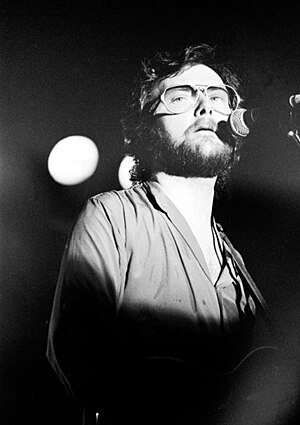 Gerry Rafferty (16 April 1947 – 4 January 2011) was a Scottish singer-songwriter.[1] His 1978 album, City to City, reached number one on the music charts in the USA.[1] "Baker Street", a song from the album reached the Top 10 in both the USA and Britain.[1] It featured a distinctive saxophone solo played by Raphael Ravenscroft.[1]

Rafferty was born in Paisley, Scotland and began playing in bands as a teenager. "Stuck in the Middle" was written in the early 1970's with his band "Stealers Wheel". It was a parody of Bob Dylan's style.[1] It became a hit again after being used in the movie Reservoir Dogs directed by Quentin Tarantino in 1992.[1] Rafferty also played in a folk group, the Humblebums, with Scottish comedian Billy Connolly.[2]

He sold more than 10 million albums but did not enjoy working in the music industry which he said he "loathed and detested."[1] He died in Stroud, Gloucestershire, England, from liver failure caused by his alcoholism.[2]