Do not confuse this with the modern country Ghana. 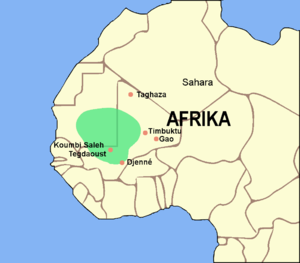 Ghana Empire at its largest

The Ghana Empire was in what is now southeastern Mauritania, Western Mali, and Eastern Senegal. It is also sometimes called the Wagadou Empire. It started in about 750 and ended in about 1076. They had two sides muslim and nonmuslim what divided them was a 6 mile boulevard (street).