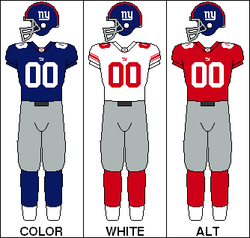 The New York Giants started playing in 1925. They were named for the baseball team also called the New York Giants. They have won six NFL championships, including some before the Super Bowl era. On February 3, 2008, the Giants beat the previously unbeaten New England Patriots (17-14) to win their third Super Bowl championship in Super Bowl XLII as well as stopping them from achieving the NFL's first 19-0 season. The previous two Super Bowl victories came against the Denver Broncos and the Buffalo Bills (when they won the game on a missed last second field goal that went "wide right".) The Giants won Super Bowl XLVI against the Patriots but this time the Patriots went 13-3 in the regular season. The Giants beat them in Foxborough during the 2011 season.