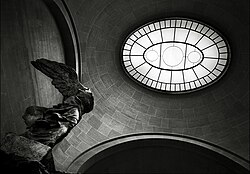 The Louvre is a museum in Paris has millions of visitors every year because of its art collection. It is the most popular art museum in the world.

The most famous arts in the Louvre is the Mona Lisa by Leonardo da Vinci. Other paintings include works of Rembrandt, Giambattista Pittoni, Caravaggio, Rubens, Titian and Eugène Delacroix.

There are also statues inside the Louvre. The most famous statues are the Venus de Milo and the Winged Victory of Samothrace.

History of the Louvre

Philip II of France built a castle called the Castle of the Louvre. It used to be where the museum is. They used the castle as a fortress to defend Paris against the Vikings. Charles V, King of France turned the castle into a palace. However, Francis I, King of France, knocked it down and built a new palace.

The Louvre with the Louvre Pyramid in the middle