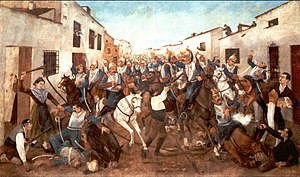 Spanish guerilla forces resisting the Napoleonic French invasion, in 1808, where the word "guerrilla" was first used in warfare.

Guerrilla warfare is a war tactic in which people (Spanish: guerrilleros) fight against an organized army. Guerrilla warfare is sometimes practiced in places where a regular army has difficulty, such as forests and mountains. Usually, this army is invading a territory. In open fields, the organized army, which is better armed and larger, has the advantage. But in forests and mountains, the guerillas can gain an advantage over even large and better armed armies.

Guerrilla is a word of Spanish origin. It means "little war". It was first used in 1808, when Spain was invaded by Napoleon, resulting in the Peninsular War with Spanish guerilla forces resisting the French Army.