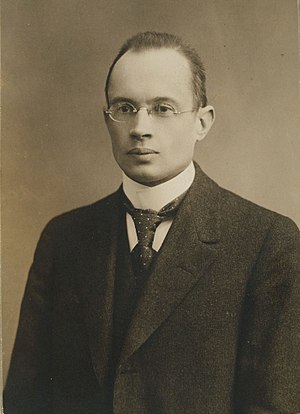 Gunnar Nordström (12 March 1881, Helsinki – 24 December 1923, Helsinki) was a Finnish physicist. He is best known for his theory of gravitation, which was a competitor of Albert Einstein's general relativity. In 1914, Nordström added a space dimension to his theory. This described gravity and electromagnetism at the same time. Unluckily, Theodor Kaluza and Oskar Klein have got most attetion on this subject. Nordström is not well known in his own home country, but what he has done is known well in other countries. Some Finnish authors call Nordström as Finnish Einstein.

Nordström was born in Helsinki, the capital of Finland during the time when Finland was part of Russian Empire). He studied at University of Helsinki and completed his dissertation in 1908. Before this, he studied for some time in Göttingen where he met the world's best scientists. After this, he became a professor at the university. In 1910, he started his trip in Europe. He visited at Zürich, Berlin, Vienna, and Leyden. During his time in the Netherlands, he married Cornelia van Leeuwen. They had three children.

Nordström was very close friend to Albert Einstein and Niels Bohr. He died at Helsinki in 1923 because of radioactivity. In that time, radioactivity was thought to have healing effects.