Dudamel was born in Barquisimeto, Venezuela. His father played the trombone. He studied music when he was quite young, and learned the violin when he was ten. He also studied composition. He became involved with El Sistema, an organization in Venezuela to help children from poorer families to learn musical instruments. He went to the Jacinto Lara Conservatory and then the Latin-American Violin Academy, learning the violin.

He began to study conducting in 1995. In 1999, he became music director of the Orquesta Sinfónica Simón Bolívar, the national youth orchestra of Venezuela, and toured several countries.

Dudamel won many prizes for conducting. He soon became well-known and conducted the Philharmonia, the Israel Philharmonic, and the Los Angeles Philharmonic. He signed a recording contract with Deutsche Grammophon. He conducted Don Giovanni at La Scala, Milan, in November 2006. On September 10, 2007, he conducted the Vienna Philharmonic Orchestra for the first time at the Lucerne Festival. In March 2008, he first conducted the San Francisco Symphony.

In 2005, Gustavo Dudamel conducted at the BBC Proms when Neeme Järvi was ill. He became Principal Conductor of the Gothenburg Symphony. He still conducts the Simón Bolívar National Youth Orchestra

Dudamel first conducted in the U.S. with the Los Angeles Philharmonic at the Hollywood Bowl in 2005. In 2009 he became their Musical Director.

On April 16, 2007, Gustavo Dudamel conducted the Stuttgart Radio Symphony Orchestra in a concert to celebrate the 80th birthday of Pope Benedict XVI, with Hilary Hahn as solo violinist. The Pope was at the concert.

A documentary film Tocar y Luchar was made about Dudamel and El Sistema. 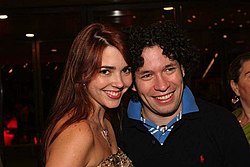 Gustavo and his wife, Eloisa Maturén

Dudamel is married to Eloísa Maturén, a Venezuelan ballet dancer and journalist.