Don Giovanni [1] is an Italian opera in two acts. It is about the character better known as Don Juan. The music was written by Wolfgang Amadeus Mozart. The libretto was written by Lorenzo da Ponte. The opera was first performed at the National Theatre in Prague on 29 October 1787.[2] It was a great success.

Don Giovanni is about a libertine and murderer who refuses to repent when given the chance. He is taken alive to Hell. The story was originally a folktale. Plays, operas, and even a ballet were produced on the theme by the time Mozart and da Ponte started work on their opera.

Story of the opera

The overture opens with a somber musical passage in D minor. This passage is also played when the statue of the Commendatore calls for Don Giovanni to repent at the end of the opera. A quick, bright section in D major follows this slow passage. It is not related to music in opera. It is spirited, vigorous, and robust. It quietly dies away as the curtain rises on the first act.

Scene 1. The garden of the Commendatore's house in Seville, Spain. Night. Don Giovanni has failed to seduce Donna Anna. Her father defends her. Don Giovanni kills him in a duel. He runs away with his servant Leporello. Donna Anna and her fiancé Don Ottavio find the dead Commendatore. They promise to bring the murderer to justice. 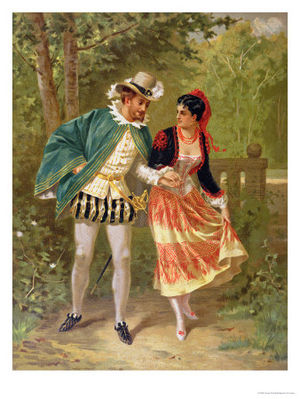 Scene 2. A street in Seville. Don Giovanni's wife Donna Elvira has just come to Seville from Burgos. She is looking for Don Giovanni. He married her, and then left her. He enters the street with Leporello. He sees Elvira and leaves. Leporello stays behind. He tells Elvira about Giovanni's bad behavior with women.

Scene 3. The countryside near Seville. Don Giovanni takes an interest in a peasant girl named Zerlina. He tries to seduce her. Elvira takes Zerlina away with her. Anna and Ottavio meet Don Giovanni. He does not want to talk to them. He hurries away. They know he is the murderer. They promise again to bring him to justice. Giovanni comes back when they leave. He orders Leporello to prepare a party.

Scene 4. A garden at Don Giovanni's palace. Masetto and Zerlina are going to the party. Masetto doubts Zerlina loves him. She tells him to beat her, if that will make him feel better. The two make up. They go into the palace. Anna, Ottavio, and Elvira come into the garden. Their faces are covered with masks. They promise to bring Don Giovanni to justice. They go into the palace.

Scene 5. The ballroom in Don Giovanni's palace. The guests are having a gay time. Don Giovanni pulls Zerlina into another room. She screams. Don Giovanni comes into the room. He tells everyone that Leporello attacked Zerlina. No one is fooled. Anna, Elvira, and Ottavio take off their masks. Ottavio has a pistol. Don Giovanni runs away. 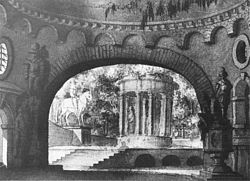 Scene 1. Evening on a street in Seville. Don Giovanni wants to seduce Elvira's maid. He changes clothes with Leporello. When Elvira enters, Leporello is sent off with the lady. She thinks he is Don Giovanni. Giovanni sings a serenade. Masetto and his friends come in. They are looking for Don Giovanni. He beats Masetto and runs off. Zerlina finds Masetto and comforts him.

Scene 2. A nearby street. Leporello wants to get rid of Elvira. She may discover he is not Giovanni. The two hear others coming into the street. They hide behind a wall. Anna, Ottavio, Zerlina, and Masetto open a door in the wall, and find Leporello. They want to punish him. He runs away. Ottavio says he will go to the police.

Scene 3. (This scene is cut in modern performances.) A street. Zerlina threatens Leporello with a razor. A servant ties Leporello to a chair. When Leporello is left alone, he escapes. Zerlina comes back with Elvira and Masetto. They believe Don Giovanni must have helped Leporello escape. Elvira is left alone. She thinks of her love for Don Giovanni. She is certain he will be punished.

Don Giovanni is taken to Hell

Scene 4. A cemetery in Seville. Don Giovanni and Leporello make jokes about Elvira. A strange voice is heard. It tells the two that justice is near. The voice is coming from a statue of the murdered Commendatore. Giovanni orders Leporello to invite the statue to dinner. The two leave to get dinner ready.

Scene 5. A room in Donna Anna's house. Anna is feeling great sorrow over her father's death. Ottavio says his love will comfort her. She is shocked with this suggestion. Ottavio says she is cruel to him. She asks him not to say such things. She tells him that her sorrow is so deep that she can think only of her dead father.

Scene 6. A room in Don Giovanni's palace. Don Giovanni is eating dinner. Elvira begs him to repent and change his way of life before it is too late. He laughs at her, and she leaves. Suddenly, the statue comes into the room. It orders Giovanni to repent. He refuses. Flames rise, and demons scream. The statue takes Giovanni's hand. Hell opens. The two disappear in the flames. Anna, Ottavio, Elvira, Zerlina, and Massetto come into the room with the police. They are looking for Don Giovanni. Leporello tells them that Giovanni has met his end. They are pleased, and make plans for happier days.

Don Giovanni is based on a character in European folklore. This character is known as Don Juan. In 1581, the first play about Don Juan was written in Spanish by Juan de la Cueva. Other plays were also written.[4] The most famous Don Juan play was The Playboy of Seville and His Stone Guest by a Spanish monk named Tirso de Molina.[5] This play is the source of all the Don Juan stories and plays that were written after it. Da Ponte even used some words from it when he was writing Don Giovanni.[4]

The first opera was a French one written in 1713. It was a comic opera. Gluck wrote a ballet for Vienna in 1761. Vincenzo Righini wrote an opera that was performed in Vienna and Prague in 1777 — ten years before Don Giovanni. There were other operas written about Don Juan. The best known opera was one by Giovanni Bertati and Giuseppe Gazzaniga. It was performed in Venice in 1787. It was a great success.[8] Da Ponte knew this opera. He made use of Bertati's libretto when he wrote Don Giovanni.[9] 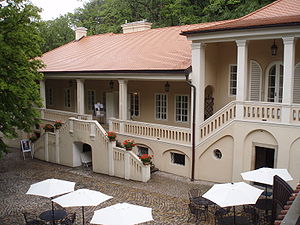 In January 1787, Mozart went to Prague for the first performance of Figaro in that city. The opera was a wild success. The manager of the opera house hired Mozart to write an opera for Prague. In Vienna, Mozart asked da Ponte for a libretto. Da Ponte gave him Don Giovanni. Mozart started work on this new opera.[10] 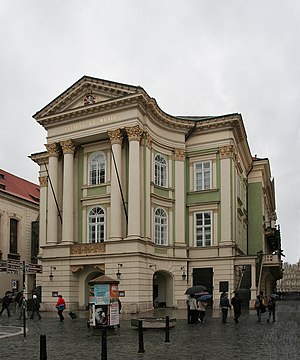 Mozart wrote most of Don Giovanni in the summer of 1787 in Vienna. Early in October, he went to Prague. He completed the opera in Prague at the Villa Bertramka, the home of friends. The first performance of the opera was postponed. The curtain rose on the world premiere of Don Giovanni at the National Theatre in Prague on October 29, 1787. The opera was a great success.[2]

One critic wrote: "On Monday the 29th the Italian Opera performed Maestro Mozart's eagerly awaited Don Giovanni ... Music lovers and musicians say that nothing to equal it has every been seen before in Prague ... Mozart himself conducted and he was given three cheers ... The opera is uncommonly difficult to perform ... The crowd of spectators bears witness to its general acclaim."[11]

There are many legends about the making of Don Giovanni. One legend says Luigi Bassi, the 22 year old singer playing Don Giovanni, wanted more music to sing. He was said to have forced Mozart to rewrite a duet five times. Another legend says Mozart flirted with all three sopranos in the opera. When one would reject his passes, he would simply move on to the next. Another legend says Mozart's wife Constanze kept her husband awake with funny stories the night before the first performance so he could complete the overture to the opera.[2] 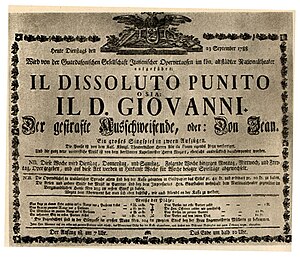 Poster for the Vienna performance

Mozart left Prague for Vienna in November 1787. Music lovers in Vienna had heard good reports of Don Giovanni. The Emperor ordered the opera to be produced at the Burgtheater. Mozart wrote some new music for the characters of Elvira and Ottavio. He also wrote a duet for Zerlina and Leporello. Don Giovanni was first performed in Vienna on May 7, 1788.[12] Mozart's sister-in-law Aloysia Lange sang Donna Anna.[13]

Legend says the performance in Vienna ended with Don Giovanni going to Hell. The final scene for Anna, Elvira, Zerlina, Ottavio, Masetto, and Leporello was probably cut. Mozart wrote some new music for the Vienna performance. He may have had to cut the last scene to keep the performance within a certain length of time. The opera was not as successful in Vienna as it was in Prague. It was dropped at the Burgtheater after fifteen performances.[12] 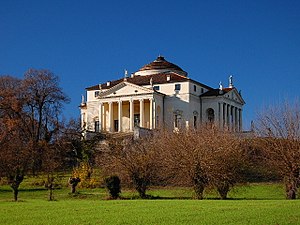 In 1979, Joseph Losey made a movie of the opera. Baritone Ruggero Raimondi played Don Giovanni. Edda Moser, Kiri Te Kanawa and Teresa Berganza played the three ladies in the opera. The movie was made in Venice instead of Spain. It used Renaissance architect Andrea Palladio's Villa Capra near Venice as its setting.

Vincent Canby wrote in the New York Times on November 6, 1979: " ... the climactic confrontation between the Don and the Commendatore is surprisingly tepid visually. I've seen better descents into hell at our own Metropolitan Opera and in any number of Hammer horror pictures. Mr. Losey and his associates haven't destroyed "Don Giovanni," but then they haven't illuminated it either. Their film is a busy, disorienting spectacle, superbly sung ... "

Modern responses to the opera

The Earl of Harewood writes: "Don Giovanni is too full of arias, many of them famous, for its own dramatic good. Perhaps it is a problem with most eighteenth-century opera. Singers demanded them, the public expected them; and of course the aria ... is a potent operatic weapon, the moment for the composer to comment in depth on the drama he has set going. But ... arias hold up the action in a way it is sometimes hard to defend, because you feel it was the singer who wanted it so."[15]

Nicholas Kenyon writes: "The power Don Giovanni unleashes is almost too great; if it is an uneven work then it is only imperfect in the way that King Lear is imperfect, from an excess of feeling. As Abert summarized it, in spite of the finale, 'the point of the opera is not to proclaim a universal moral, but to depict the decisive battle between two tremendous forces.[16]

"We sense the ultimate connection between even the most restless, passion-ridden human existence and the whole universe.' Like Figaro, Giovanni has held the stage from its premiere through to the present; it has fitted the nineteenth-century's wish for a Romantic, powerful Mozart and the twentieth-century's for a politicised, critical Mozart".[16]