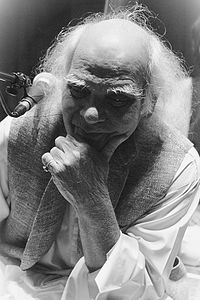 Hussain Sayeeduddin Dagar (20 April 1939 – 30 July 2017), popularly known as Saeed Bhai, was an Indian classical vocalist. His songs were dedicated to the Dhrupad tradition. The oldest existing form of north Indian classical music (Hindustani classical music).[1][2] He was a part of the Dagar family of musicians.[3][4] He was born in Alwar, Rajasthan.