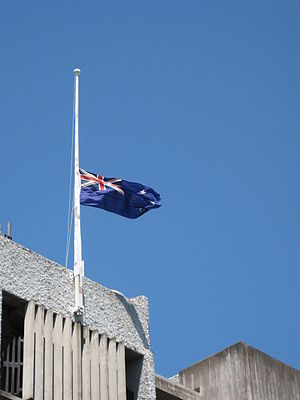 A flag of New Zealand at half-staff

Half-staff or half-mast describes a flag being displayed at halfway up a flagpole or a ship's mast. This is done in many countries as a symbol of respect, mourning, or distress, or a form of honor.

The flag does not always have to be flown at exactly the half-way point, sometimes it is acceptable to have the "half-mast" flag at slightly lower or slightly higher than the middle of the flagpole or mast. Originally, "half-staff" meant that the flag had to be flown one flag-width from the top to allow for the "invisible flag of mourning" to be at the top.[1]