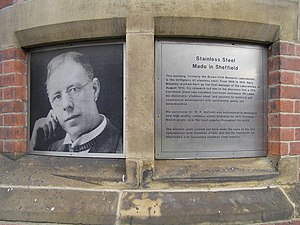 Harry Brearley (18 February 1871 – 14 July 1948) was an English metallurgist who invented stainless steel, that is, steel which does not rust.

Brearley was born in Sheffield, England, the son of a steelworker and his wife.[1] He left Woodside School at the age of twelve to enter as a labourer in his father's steelworks. Later he got the post of general assistant in the company's chemical laboratory.[1]

For several years, in addition to his laboratory work, he studied to specialize in steel production techniques and related chemical analysis methods.

After leaving Brown Firth, Brearley joined Brown Bayley's Steel Works, also in Sheffield. He became a director of the firm in 1925.[2]

In 1941 Brearley created a charitable trust The Freshgate Trust Foundation, a grantmaking charity operating in Sheffield and South Yorkshire.

In the troubled years immediately before World War I, arms manufacturing increased greatly in the UK. There were problems due to erosion (excessive wear) of the internal surfaces of gun barrels. Brearley began to research new steels which could better resist the erosion caused by high temperatures. He began to add chromium to steel, which was known to raise the material’s melting point, as compared to the standard carbon steels.

The research concentrated on quantifying the effects of varying the levels of carbon (C, at concentrations around 0.2 weight %) and chromium (Cr, in the range of 6 to 15 weight %). 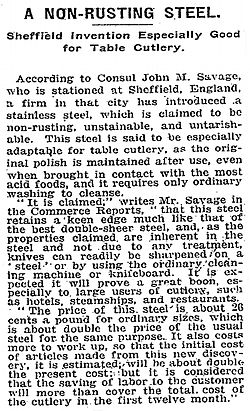 Announcement of Brearley's stainless steel discovery as it appeared in the 1915 New York Times.[3]

In order to do examine the alloys, a metal sample is treated. For a carbon steel, a dilute solution of nitric acid in alcohol is sufficient to produce the required effect. Brearley found that the new chromium steels were very resistant to chemical attack.

Up to that time carbon-steel knives rusted if they were not polished. Only expensive sterling silver or EPNS cutlery avoided the problem. With this in mind, Brearley tested his chromiun steel with food acids such as vinegar and lemon juice. The results were very promising.

Almost all research projects into stainless steels were interrupted by the 1914–18 War. The work was taken up again in the 1920s. Brearley had left the Brown Firth Laboratories in 1915, but the research continued under the direction of his successor, Dr. W. H. Hatfield. It is Hatfield who is credited with the development, in 1924, of a stainless steel which even today is probably the widest-used alloy of this type, the so-called "18/8", which in addition to chromium, includes nickel (Ni) in its composition (18wt% Cr, 8wt% Ni).