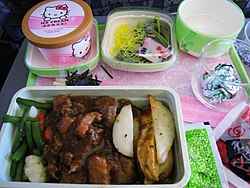 Hello Kitty is a Japanese character of a cat. It was made in 1974 by a Japanese company named Sanrio.[1] Her real name is Kitty White. The character has a large head. She usually has a red bow between her ears. She has no mouth. Sanrio said that she was not given a mouth because she communicates by using the heart instead of speaking one particular language.[2] Hello Kitty is known all over the world.

Hello Kitty became very popular with young school-girls during the 1980s. Because a Japanese singer, Kahara Tomomi, who was very popular among young school-girls said openly that she loved Hello Kitty on the TV.[source?] In the 1990s Sanrio made more products with the picture of the cat which would appeal to teenagers and young women. During the later part of the first decade of the 21st century, Hello Kitty began targeting boys and young men with Hello Kitty for Boys.[source?] The character uses darker colours and a dark bow when it is targeted to males.

Hello Kitty has become very successful. The character's picture is on over fifty thousand products sold in most countries.[source?] Sanrio’s amusement park Puroland opened in 1990. It is visited by more than 1.5 million visitors each year. Hello Kitty has been an animated character, such as in Hello Kitty’s Furry Tale Theatre, shown on United States television during 1987 and 1991.

Famous stars such as Mariah Carey and Britney Spears were photographed with products which had her picture. Hello Kitty is an example of a Japanese Kawaii (cute in English) character.

Kitty was born in London England on November 1st, and to this day she lives in there with her family. She likes the apple pie her mother makes. Her mother has her wear a ribbon on her left ear, in order to tell the difference between twins Kitty and Mimmy. She enjoys baking cookies and playing the piano; she aspires to be a pianist or a poet when she is older. Her height is as same as five apples and her weight is as same as three apples. Her boyfriend is Daniel Starr.

She is the twin sister of Kitty White. She wears a yellow ribbon on her right ear. She is shy and feminine.

He is Kitty's childhood friend, born on May 3rd. He is often called "Dear Daniel", resembling "Hello Kitty". He has a naive and sentimental personality. His favorite foods are cheesecake and yogurt, and his talents include dancing and playing the piano. He wishes to be a photographer someday.

Mary is Kitty and Mimmy's mother. She is very generous and good at cooking, cleaning and washing. Her birthday is September 14th.

George is Kitty and Mimmy's father. He is very reliable and humorous man. His birthday is June 3rd.

Help Improve This Page: Please contact us to become an approved KidzSearch editor and provide your credentials. Provide feedback on this article in our Hello Kitty Forum