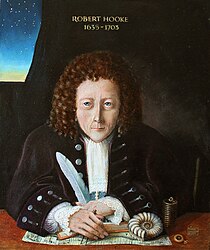 An artists theory of Hooke's appearance

Robert Hooke FRS (Isle of Wight, 18 July 1635 – London, 3 March 1703) was an English naturalist, architect and polymath. Hooke played an important role in the birth of science in the 17th century with both experimental and theoretical work. He was a colleague of Robert Boyle and Christopher Wren, and a rival to Isaac Newton. Hooke was a leader in the plans to rebuild after the Great Fire of London in 1666.

There is no surviving portrait of Hooke.[1]

He discovered Hooke's Law of elasticity. He designed and ordered the making of telescopes and microscopes, and used both instruments. He reported on this work in a book called Micrographia in 1665. He was the first person to see biological cells. He made drawings of bodies in the Solar System, and made the first attempts to measure the distance of certain stars.[2]

Robert Hooke was appointed the Royal Society's first Curator of Experiments in 1662, and he rose to be Secretary of the Royal Society. He took responsibility for experiments performed at its weekly meetings. This was a position he held for over 40 years.

In 1664 Hooke also was appointed Professor of Geometry at Gresham College in London and Cutlerian Lecturer in Mechanics.[3]

Hooke did some fundamental work on gravitation and the motion of the planets. Forever after, he was convinced that Newton and the world had cheated him of the credit.[2]p389

He was also known for his work in natural history (biology and geology).[6] He reported on his microsope use in a book called Micrographica in 1665. He was the first person to see biological cells, and was the first to use the word 'cell' to describe them.

In 1668, in a talk to the Royal Society, he recognised that fossil shells of unknown marine animals suggested that some species had become extinct. 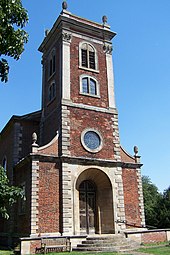 The church at Willen, Milton Keynes.

Hooke achieved fame in his day as Surveyor to the City of London and chief assistant of Christopher Wren. Hooke helped Wren rebuild London after the Great Fire in 1666.

He also worked on the Royal Greenwich Observatory, and the infamous Bethlem Royal Hospital (which became known as 'Bedlam'). Many other buildings were designed by Hooke, including the Royal College of Physicians (1679).

Hooke's collaboration with Christopher Wren included St Paul's Cathedral, whose dome uses a method of construction conceived by Hooke. Hooke also participated in the design of the Pepys Library, which held the manuscripts of Samuel Pepys's diaries, the most frequently cited eyewitness account of the Great Fire of London.[7]

In the reconstruction after the Great Fire, Hooke proposed redesigning London's streets on a grid pattern with wide boulevards and arteries, a pattern later used in the renovation of Paris, Liverpool, and many American cities. This proposal was thwarted by arguments over property rights, as property owners were surreptitiously shifting their boundaries. Hooke was in demand to settle many of these disputes, due to his skill as a surveyor and his tact as an arbitrator.[8]