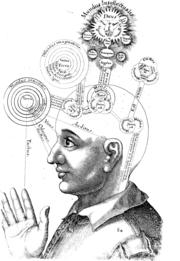 Humans have thought about the nature of intelligence for millennia. This picture is from a work by Robert Fludd published between 1617 and 1621.

Intelligence is a property, or characteristic of the mind. There is not agreement on what intelligence is. The idea comes from a Latin word: intelligo meaning to choose between different options. A part of intelligence allows people to solve problems. These problems may be easy to solve. They may also be difficult to solve, and involve abstract thought.

If an answer is found to a problem, it can be remembered. That way, the problem is solved more quickly when it comes up again. This is what is called learning.

There is disagreement about which has more influence on intelligence, genetics or environment. Also, intelligent behaviour is possibly learned when an organism (a living thing) reacts enough to a stimulus.

Scientists believe that intelligence can be measured or tested. A type of intelligence test would be solving many problems in a very short time. Most of the problems have to do with seeing things, or telling what a rotated shape would look like. Some are also related to mathematics: for example to tell what number would come next in a row. Other tests have to do with words or the understanding of language. After giving such a test to a person, a number would be calculated to give an approximation of the Intelligence Quotient (IQ). Since many of the words on the language tests come from Latin, this part of an Intelligence Quotient might measure how much a person has learned or understands Latin.

Computer engineers try to build machines that act as if they were intelligent. This is related to computer science and is called Artificial intelligence (man-made "intelligence").