Kudzu, a Japanese vine, is invasive in the southeast United States. Here it grows in Atlanta, Georgia

An invasive species is a species which is not native to the place where it is found. It has moved from its native area, where it grew naturally, into a new area. Often it becomes a nuisance species, because in its new habitat it lacks its old enemies. Normally, as a species evolves, so do the things which eat it or parasitise it. Free of natural restraints, the invading species outcompetes its new neighbours.

Kudzu, for example, is called "The weed which ate the South" because it went out of control in the southern United States. The introduction of starlings to North America is another example.

The sparrow in North America 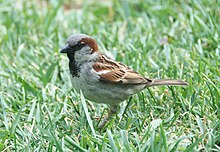 The house sparrow, Passer domesticus, native to Europe and Asia, has been introduced to North and South America and Australia.

It was introduced deliberately to the U.S.A. in the late 19th century by Eugene Schieffelin. He wanted to introduce to America all the birds mentioned in the works of Shakespeare. Two of these species were great successes: starlings and house sparrows. He organized a society for the importation of foreign birds, incorporated in Albany.[1]