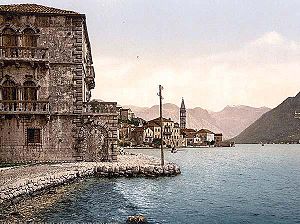 Postcard showing the Venetian architecture of Perasto in 1900

Italian cultural and historic presence in Dalmatia is related to the Italian influence in Dalmatia (now divided between Croatia, Herzegovina and Montenegro) from the historical and cultural points of view.

The historical influence from the Italian peninsula in Dalmatia started with the Roman conquest of Illyrian Dalmatia. The historian Theodore Mommsen stated in his book History of Rome that all Dalmatia was fully Romanised and Latin speaking by the fourth century.

The actual Dalmatians may in part trace their origins back to the Romanised Illyrians during the "Barbarian Invasions" of the fifth and sixth centuries when Avars with some Slavs invaded Illyria. This invasion opened the way to the settlement of different Slavic tribes (mainly the "Croats").

The Dalmatian possessions of the Venetian republic in 1560, before the venetian annexation of the Republic of Ragusa

During those years the original Latin population took refuge in the coastal cities and in the islands, whilst other migrated to the mountains (they were later called "Morlachs"). So, in the early Middle Ages, the coastal area of Dalmatia retained its original Latinized culture, mainly on the islands and cities such as Zara, Spalato, Ragusa and Cattaro. These cities during the Middle Ages were called "Citta' marittime di Dalmazia" (Dalmatian maritime neolatin cities) and maintained deep cultural and commercial links with the Italian mainland, thanks to intense commerce through the Adriatic sea.[1]

Starting from the tenth century the Republic of Venice imposed its influence on Dalmatia, gradually assimilating the neolatin Dalmatians while the local Slavs maintained their language.

The Republic of Venice controlled most of Dalmatia from 1420 to 1797. During that period, part of its Slavic population was italianised. The Venetian possessions were called "Venetian Dalmatia" and enjoyed a flourishing period of economic bonanza with huge development of the arts and culture. Dalmatia was greatly influenced by the Italian Renaissance and many buildings, churches and cathedrals were done in those years, from Zara and Spalato to Sebenik and Ragusa.

In these centuries, the Venetian language became the "lingua franca" of all Dalmatia, assimilating the Dalmatian language of the Romanised Illyrians and influencing partially the coastal Croatian language ("Chakavian"[1]) and the Albanian language.[2]

After the fall of the Republic of Venice in 1797 to the Napoleon Armies, the Dalmatia was incorporated briefly (1805-1809) in the "Napoleonic Kingdom of Italy". In those years the scholastic system was expanded to all the population (following the ideals of the French Revolution) and the Italian language was instituted as the official language in the schools of Dalmatia.

When Austria occupied Dalmatia there was a revival of the Slav people inside Dalmatia. The Italian (venetian speaking) population, that was (according to the Italian linguist Bartoli) nearly one third of the Dalmatians in the second half of the XVIII century, according to the Austrian census decreased from 22% in 1816 to 12.5% in 1853 and a mere 2.9% in 1910.

After WWI, by the Treaty of London, Italy obtained Zara and some northern Dalmatian islands (Cherso and Lussino). During WWII the Kingdom of Italy annexed, to the newly created Governatorato di Dalmazia, most of Dalmatia. In 1942 there were 4020 Italians in these newly annexed areas: 2220 in Spalato (Split), 300 in Sebenico (Sibenik), 500 Cattaro (Kotor) and 1000 Veglia (Krk). Furthermore there were in the Governatorato 10000 Italians who took the Yugoslav citizenship after WWI, in order to remain there and be accepted without problems by the new Yugoslavian regime after the fall of the Austro-Hungarian Empire.[3]

That means that in only one hundred years (from the 1850s to the 1950s) the Dalmatian Italians decreased from 45000 in the 1857 Austrian Census[5] to less than one thousand in the last Croatian and Montenegrin Census.

The cultural influence from the Italian peninsula is extremely important in Dalmatia since the Roman times. It has increased to influence totally the dalmatian culture during the times of the Republic of Venice and the Italian Renaissance.

Indeed, the "British Encyclopedia" states that: "the monuments left in Dalmatia by the Romans are numerous and precious. They are chiefly confined to the cities; for the civilization of the country was always urban, just as its history is a record of isolated city-states rather than of a united nation. Beyond the walls of its larger towns, little was spared by the barbarian Goths, Avars and Slavs; and the battered fragments of Roman work which mark the sites of Salona, near Spalato, and of many other ancient cities, are of slight antiquarian interest and slighter artistic value. Among the monuments of the Roman period, by far the most noteworthy in Dalmatia, and, indeed, in the whole Balkan Peninsula, is the Palace of Diocletian at Spalato. Dalmatian architecture was influenced by Constantinople in its general character from the 6th century until the close of the tenth. The oldest memorials of this period are the vestiges of three basilicas, excavated in Salona, and dating from the first half of the 7th century at latest. Then from Italy came the Romanesque. The belfry of S. Maria, at Zara, erected in 1105, is first in a long list of Romanesque buildings. At Arbe there is a beautiful Romanesque campanile which also belongs to the 12th century; but the finest example in this style is the cathedral of Trail. The 14th century Dominican and Franciscan convents in Ragusa are also noteworthy. Romanesque lingered on in Dalmatia until it was displaced by Venetian Gothic in the early years of the 15th century. The influence of Venice was then at its height. Even in the relatively hostile republic of Ragusa the Romanesque of the custom-house and Rectors' palace is combined with Venetian Gothic, while the graceful balconies and ogee windows of the Prijeki closely follow their Venetian models. In 1441 Giorgio Orsini of Zara, summoned from Venice to design the cathedral of Sebenico, brought with him the influence of the Italian Renaissance. The new forms which he introduced were eagerly imitated and developed by other architects, until the period of decadence - which virtually concludes the history of Dalmatian art - set in during the latter half of the 17th century. Special mention must be made of the carved woodwork, embroideries and plate preserved in many churches. The silver statuette and the reliquary of St Biagio at Ragusa, and the silver ark of St Simeon at Zara, are fine specimens of Italian jewellers' work, ranging in date from the 11th or 12th to the 17th century". 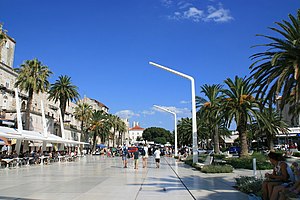 The "Riva" (seashore in Italian) of Split (Spalato), that was created and named by Bajamonti, the last Dalmatian Italian Major of the city. Nearby it is located the Comunita Italiana office of the local Dalmatian Italians

In the XIX century the cultural influence from Italy originated the creation in Zara of the first dalmatian newspaper, edited in Italian and Croat: Il Regio Dalmata - Kraglski Dalmatin. It was founded and published by the Italian Bartolomeo Benincasa in 1806.

The Regio Dalmata - Kraglski Dalmatin was stamped in the tipography of Antonio Luigi Battara and was the first done in Croat language.

The cultural influence from Italy is clearly evident in the urbanization plans of the main Dalmatian cities in the XIX/XX centuries. One of the best examples is the one of Split/Spalato.

In 1880 Antonio Bajamonti (the last Dalmatian Italian Major of Spalato under Austrian rule) developed an urbanization project of this city centered on the "Riva", a seaside walkway full of palms based on the Italian Riviera models. Even today the Riva (with cafe bars) is used by the locals to stroll in a typical Italian way from the "Palace of Diocletian" toward an old square called locally "Pjaca" (or square in venetian).

An enduring example of the Italian cultural and historic presence in Dalmatia is the small town of Perasto (actually Perast in montenegrin language) in coastal Montenegro.[7]

Perasto was at its peak in the 18th century under the Republic of Venice, when it had as many as four active shipyards, a fleet of around one hundred ships, and 1,643 residents. At that time the most beautiful buildings arose in this fortified town. Many ornate baroque palaces and magnificent dwelling-houses decorated the town of Perast (Perasto), full of typical venetian architecture.[8] Perasto had the privilege to keep war-flag of the Venetian Navy in the peace time (it was called "La fedelissma Gonfaloniera")[2] Archived 2011-07-11 at the Wayback Machine.
The sailormen of Perasto were involved in the last battle of the Venitian navy, fought in Venice in 1797 [3].
At the fall of the "Serenissima" (1797) Perasto was the last city of the Repubblic to lower the Venetian flag. On 12 May 1797, the Republic of Venice ended, but a few places in the Albania veneta for several months still continued to remain loyal to the Venetian Repubblic: Perasto was the last place of the Republic to surrender. On 22 August 1797 the Count Giuseppe Viscovich, Captain of Perasto lowered the Venetian war-flag of the Lion of Saint Mark pronouncing the farewell words in front of the crying people of the city and buried the "Gonfalon of Venice" under the altar of the main church of Perasto.

The population has since decreased to 430 in 1910 and around 360 today. According to the "Comunita' nazionale italiana del Montenegro", in Perast actually there are 140 persons who still speak at home the original venetian dialect of Perasto (called "veneto da mar"), and call themselves in the census "Montenegrins".