As a painter, Jacques-Louis David wanted artwork to be political. He often painted heroes from myths or history that he believed represented good ideals such as strength, brotherhood, and virtue. His paintings are very realistic and often portray heroes from Ancient Greece and Rome. This is called the Neoclassical style of painting. 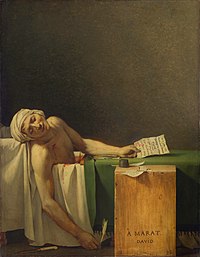 The Death of Marat by Jacques-Louis David (1793)

One of David's most famous paintings is of his best friend Jean-Paul Marat who was killed during the French Revolution. David's painting helped make Marat into a popular martyred hero.