James Hadley Billington (June 1, 1929 – November 20, 2018) was an American academic. He was the 13th Librarian of the Library of Congress. He was appointed by President Ronald Reagan. Billington served as librarian from September 14, 1987 until his resignation on September 30, 2015.

Billington born in Bryn Mawr, Pennsylvania on June 1, 1929. He was raised in Philadelphia, Pennsylvania. Billington studied at Princeton University and at Balliol College, Oxford. 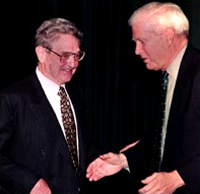 Billington first began as a professor in Harvard University. From 1973 to 1987, Billington was director of the Woodrow Wilson International Center for Scholars, the nation’s official memorial in Washington, D.C. to America’s 28th president. As director, he founded the Kennan Institute for Advanced Russian Studies at the Center and seven other new programs as well as the Wilson Quarterly.

Billington was sworn in as the Librarian of Congress on September 14, 1987. He is the 13th person to hold the position since the Library of Congress was established in 1800. His appointment was unanimously confirmed by the Senate.[1]

Billington has championed the Library’s American Memory National Digital Library (NDL) Program, which makes freely available on-line over 24 million American historical items[2] from the collections of the Library and other research institutions. These unique American Memory materials and the Library’s other Internet services, which include the congressional database, THOMAS, the on-line card catalog, exhibitions, information from the U.S. Copyright Office and a web site for children and families called America’s Library, handled more than 2.6 billion transactions last year.

Billington resigned in early September 2015 because of his age. His resignation became effective on September 30, 2015.

Billington was married to the former Marjorie Anne Brennan. They had four children: Dr. Susan Billington Harper, Anne Billington Fischer, the Rev. James Hadley Billington Jr., and Thomas Keator Billington, as well as 12 grandchildren.[3] Dr. Billington and his daughter Susan are the first father and daughter to both be awarded Rhodes Scholarships and use them to earn DPhils (at Oxford University).