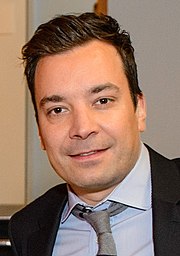 James Thomas "Jimmy" Fallon, Jr. (born September 19, 1974) is an American actor, comedian, singer, musician and television host. He was the host of Late Night with Jimmy Fallon. He was a cast member of Saturday Night Live and has also hosted that show. He is now the host of The Tonight Show.

Fallon was born on September 19, 1974 in Brooklyn, New York.[1] He was raised in Saugerties, New York. He studied at The College of Saint Rose. Fallon has been married to Nancy Juvonen since 2007.[2]