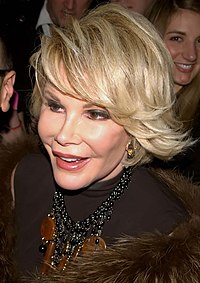 Joan Rivers (born Joan Alexandra Molinsky; June 8, 1933 – September 4, 2014) was an American comedian, talk show host, businesswoman, and celebrity. She was known for her tough manner and loud voice with a heavy New York accent. She was the National Chairwoman of the Cystic Fibrosis Foundation and was a board member of God's Love We Deliver.[1] She won an Emmy Award in 1990.

Rivers was born in Brooklyn, New York City. She was raised in Larchmore, New York. Rivers studied at Connecticut College and at Barnard College.

Similar to how Phyllis Diller career began, Rivers' comedy act was mainly about bad things about herself.

In the morning of August 28, 2014, Rivers was rushed to the hospital after suffering from cardiac arrest during surgery on her throat in New York City.[2] She was put on life support and was in a medically induced coma.[3]

On September 4, 2014, Melissa announced that Rivers had died at the age of 81 from heart failure caused by respiratory and cardiac arrest.[4]