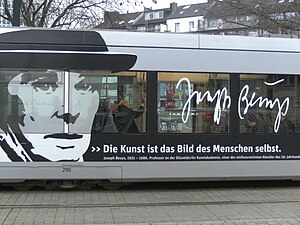 Joseph Beuys presented on a tram in Düsseldorf

Joseph Beuys (pronounced "boyce") (12 May 1921 – 23 January 1986) was a German artist who made arts in many forms including sculpture, performance art (happening, fluxus), video art, and installations. He was an important artist in the second half of the 20th century.

Beuys was born in Krefeld on 12 May 1921, but grew up in the near-by city of Kleve. His family was profoundly catholic. As a young child he began his interest in art by often engaging in making watercolours. He first saw modern art when visiting the studio of Achilles Moortgat. At the age of seventeen in 1938, he joined Hitler Youth, like many young German men at that time. He studied many disciplines before engaging in his art practice, and was particularly interested in natural sciences and history, including alchemy, and focussed on medicine with the intention of becoming a doctor. During his studies, however, World War II began, and he became a soldier in the German air force. There, he was a rear gunner (gunner in the back) in a military airplane. In 1943 one of his close friends died in a concentration camp.

One fascinating aspect of Joseph Beuys's personal history is the reason he consistently used felt and fat in his works. He is quoted as saying: "For me, fat was a great discovery, because it was the very material that could seem the most chaotic and indeterminate. I could use it with heat or cold, I could transform it with means that are not the traditional ones for sculpture- with temperature, for example. So I could turn the character of this fat from a chaotic and fluctuating condition to that of a rigid form... So I took an extreme position in sculpture and a material that was absolutely fundamental for life and not associated with art.”

Many people believe that this use of felt and fat recalled a plane crash experienced while flying for the Luftwaffe in the Crimea in the winter of 1942-43. Beuys claimed that he had been saved by a nomadic tribe of Tartars who, sympathetic to the Germans after persecution by the Soviets, ‘covered my body in fat to help it regenerate warmth, and wrapped it in felt as an insulator to keep warmth in’. In fact this episode was fabricated, partly on the basis of a dream, but he consistently referred to this episode and it can be seen as a private mythology of his.

After the war Beuys studied at the academy in Düsseldorf from 1946 to 1951. For most of the 1950s he was mostly drawing.

In 1961 he became professor of sculpture there, but was fired in 1972 because he said that his classes must be open to anybody who wanted to take them. He thought that classes should be free and he worked in his classes with everybody who wanted. His students protested when he was fired, so he was allowed to hold his studio there, but he still lost his job.

In 1962 Beuys was member of the "Fluxus movement". They made art together by drawing, sculpting, making music, and literature.

Beuys believed that arts has an important rule in society. His first problems with politicians were when he lost his job as professor. In the 1980s he was part of the Peace Movement and protested against nuclear missiles in Germany. He was one of the first members of the Green Party in the 1980s.

Famous works are for example:

In 1979, a large retrospective of Beuys' work at the Guggenheim Museum in New York City confirmed his reputation as one of the most important artists of his time. He died in 1986 in Düsseldorf.

The web comic Cat And Girl makes frequent reference to Joseph Beuys, including his art (reference 1 reference 2) and cultural references.