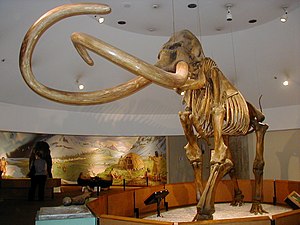 The La Brea tar pits (or Rancho La Brea) are a famous cluster of tar pits in central Los Angeles. Many thousands of complete skeletons of large animals have been found here. They date mostly from 40,000 years ago to 8,000 years.

Hancock Park was formed around the tar pits, in the heart of Los Angeles. Asphalt or tar (brea in Spanish) has seeped up from the ground here for tens of thousands of years. The tar is often covered with water. Over many centuries, animals that came to drink the water fell in, sank in the tar, and were preserved as bones. The George C. Page Museum is dedicated to researching the tar pits and displaying specimens from the animals that died there. The La Brea Tar Pits are now a registered National Natural Landmark.

Among the large mammals found there are Among the prehistoric species associated with the La Brea Tar Pits are mammoths, American mastodons, American lion, American cheetah, dire wolves, the Western camel Camelops, short-faced bears, ground sloths, and the state fossil of California, the saber-toothed cat, Smilodon fatalis. Only one human has ever been found, a partial skeleton of a woman,[1] dated at approximately 9,000 BP who was apparently a victim of a homicide based on skull crush evidence .[2][3]