Laredo is a mid-sized city in southern Texas, United States established in the year 1755. Laredo has a population of 207,787. Hispanics make up 90% of the total population, and the city is largely Catholic. Laredo is a border city which is part of the bi-national metropolitan area of Laredo, Texas - Nuevo Laredo, Tamaulipas, Mexico with a total population of 575,585. The main sources of income for Laredo is international trade, followed by retail sales.

Laredo was founded by Don Tomas Sanchez under the name of Villa de San Agustin de Laredo in 1755 in a colony called Nuevo Santander in New Spain. Today, most of Nuevo Santander is part of Texas. 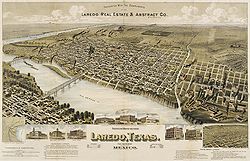