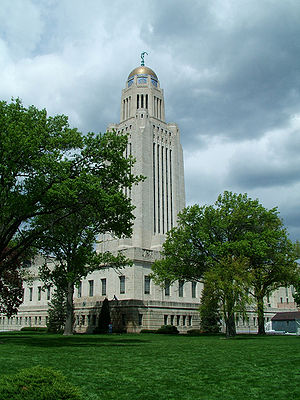 People from Omaha tried to stop the move by renaming Lancaster after the recently killed President Abraham Lincoln. Many of the people south of the river had wanted the Confederate to win the recent Civil War. These people thought that the legislature would not approve the move if the future capital were named after Lincoln. The plan did not work, as Lancaster was renamed Lincoln and also became the state capital upon Nebraska's admission to the Union on March 1, 1867. The people either liked or disliked the new name depending on how they felt about the Civil War.[3]

The Capitol at night

Nebraska State Capitol was designed by Bertram Grosvenor Goodhue and constructed between 1922 and 1932. The capitol building is a skyscraper topped by a golden dome. The tower is crowned by a 6-meter (20 ft) statue of a farmer sowing grain on a pedestal of wheat and corn, to represent the state's agricultural heritage. City zoning rules prevent any other building from rivaling it in height, making it a landmark not only within the city but for the surrounding area. Inside, there are many paintings and iridescent murals showing Native American heritage and the history and culture of the early pioneers who settled Nebraska. It is the second tallest U.S. State Capitol building behind the Louisiana State Capitol building in Baton Rouge.[4]

Lincoln has a humid continental climate (Dfa in the Köppen climate classification).