Map of the region, with Lindisfarne at the right edge

Lindisfarne (often called Holy Island), is a tidal island off the north-east coast of England. It is connected to the mainland of Northumberland by a causeway and is cut off twice a day by tides – something well described by Sir Walter Scott:

For with the flow and ebb, its style
Varies from continent to isle;
Dry shod o'er sands, twice every day,
The pilgrims to the shrine find way;
Twice every day the waves efface
Of staves and sandalled feet the trace.

Large parts of the island, and all of the adjacent inter-tidal area, are protected as Lindisfarne National Nature Reserve to help safeguard the internationally important wintering bird populations. Grey seals are frequent visitors to the rocky bays at high tide. 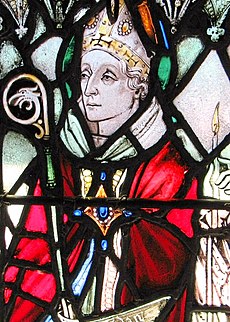 The monastery of Lindisfarne was founded by Irish-born Saint Aidan. He was brought from Iona off the west coast of Scotland to Northumbria around AD 635 by King Oswald of Northumbria. It became the base for Christian evangelising in the North of England and also sent a successful mission to Mercia. Monks from the community of Iona settled on the island.

Northumberland's patron saint, Saint Cuthbert, was a monk and later Abbot of the monastery, and his miracles and life are recorded by the Venerable Bede. Cuthbert later became Bishop of Lindisfarne.

In the early 700s the famous illuminated manuscript known as the Lindisfarne Gospels (an illustrated Latin copy of the Gospels of Matthew, Mark, Luke and John) was made, probably at Lindisfarne.

Later, a monk named Aldred added an Anglo-Saxon translation to the Latin text. This made (late 10th century) the earliest surviving Old English copies of the Gospels.

In 793 a Viking raid on Lindisfarne scared many people throughout the Christian West. The year 793 is often called the beginning of the age of Viking raids. A very famous passage in the Anglo-Saxon Chronicle reads:

"In this year fierce, foreboding omens came over the land of Northumbria. There were excessive whirlwinds, lightning storms, and fiery dragons were seen flying in the sky. These signs were followed by great famine, and on January 8th of the same year, the ravaging of heathen men destroyed God's church at Lindesfarne."

Eventually the monks fled the island. They took with them the body of St Cuthbert, which is now buried at Durham Cathedral. The priory was re-established in Norman times as a Benedictine house and continued until its dissolution in 1536 under Henry VIII. It is now a ruin in the care of English Heritage, who also run a museum/visitor centre nearby. The neighbouring parish church (see below) is still in use.

Lindisfarne also has the small castle, based on a Tudor fort and open to visitors.

Lindisfarne seen from the mainland