Livorno is a port city on the Ligurian Sea on the western coast of Tuscany, Italy. 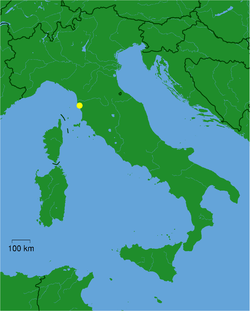 Location of Livorno in Italy

Today, Livorno is known for the fortified town walls and for the small streets. Many foreigners moved to Livorno such as Jews, Armenians, Greeks, Dutch, and English. Some Moriscos (Muslim Spaniards forced to turn Catholic), much later, also moved to Livorno (from Spain and during the 18th century). 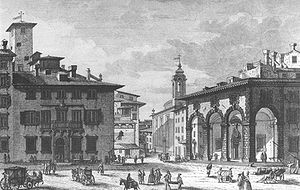 Piazza Grande in the 18th century: at left, the Palazzo del Governatore, at right the Dogana

Bridges, houses and streets, mostly from the neo-classical era are in the district of Livorno.

The "Monumento dei quattro mori" ("Monument of the Four Turks"), dedicated to Grand Duke Ferdinando I de' Medici of Tuscany, is one of the most important monuments of Livorno.

Fortifications of Livorno in the 17th century

Another important monument is the old fortress which has 3 bastions called “Capitana”, “Ampolletta” and “Canaviglia”. It was made before the Renaissance.

Politically, Livorno is one of the most left-leaning cities of Italy. The Communist Party of Italy was founded in Livorno on 21 January 1921.

Tuaca liqueur is produced in Livorno. The city also has a petrochemical industry.

Livorno has a football team in Serie A, A.S. Livorno Calcio.