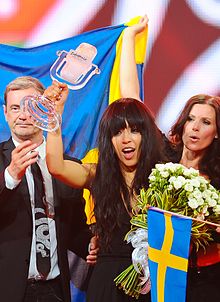 Lorine Zineb Nora Talhaoui (born 16 October 1983 in Stockholm), better known by her stage name Loreen, is a Swedish pop singer and music producer with Moroccan-Berber ancestry. Loreen represented Sweden in the Eurovision Song Contest 2012 in Baku, Azerbaijan with "Euphoria". She was discovered in the Swedish casting show "Idol". After winning the Eurovision Song Contest 2012 her song is number one in the billboard charts in many countries.