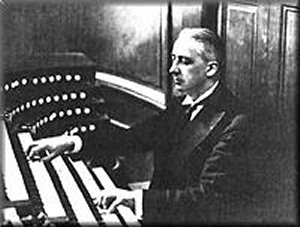 Marcel Dupré (born Rouen, Normandy, 3 May 1886; died Meudon, near Paris, 30 May 1971), was a French organist, composer, and teacher. He became famous all over the world for his organ playing, and he composed a lot of music for that instrument.

Marcel Dupré was born in Rouen (Normandy, France). His family were musical. His father Albert Dupré was organist at the gothic abbey of St Ouen in Rouen. The young Marcel was a child prodigy. He entered the Paris Conservatoire in 1904, where he studied the piano and organ. His organ teachers were the most famous organists in France: Alexandre Guilmant and Louis Vierne, and also Charles-Marie Widor who taught him how to compose. In 1914, Dupré won the Grand Prix de Rome for his cantata, Psyché. Twelve years later, he became professor of organ at the Paris Conservatoire, and stayed in that job until 1954.

Dupré became famous for performing more than 2,000 organ recitals in Europe, the United States, Canada and Australia. In 1920 he gave a series of concerts at the Paris Conservatoire in which he played all the organ works by Johann Sebastian Bach from memory.

He soon became world-famous. In 1934 Widor resigned as organist at St. Sulpice in Paris, and Dupré took over the post, which he kept for the rest of his life.

From 1947 to 1954, he was director of the American Conservatory, which was in the Château de Fontainebleau near Paris. In 1954, Dupré took over from Claude Delvincourt (who had been killed in a car crash) as director of the Paris Conservatoire, where he stayed until 1956. He died at the age of 85.

When Dupré gave organ recitals he often played his own compositions as well as those of other composers, especially Bach. Like Widor and Vierne, he composed long works in several movements which he called “symphonies”. When he played in church services he would start by playing composed music which was suitable for the time of year. Then he would improvise, playing complicated fugues, trio sonatas and chorale improvisations. He was so good at improvising that many people thought he had composed the music beforehand.

When playing in concerts he was often given a tune, and then he would immediately make up a large work from that tune. In 1906, when he was still a student, he played for a wedding and two services when the famous Widor was going to be absent. Dupré asked Widor what music he should play. Widor told him to improvise something. Dupré waited for Widor to go out of the church before he started practising, but Widor crept back in and listened to him. He realized that Dupré would manage very well.

Dupré composed a great deal of organ music. When he was a boy he got to know Aristide Cavaillé-Coll, the most famous organ builder in France. Cavaillé-Coll had built the organ that Dupré’s father played, so he was used to the sound of modern French organs. Most of Dupré's music for the organ is very difficult to play. It includes the Three Preludes and Fugues, Op. 7 (1914). Even Widor thought that the Prelude of the third piece was simply impossible to perform. However, Dupré could play it, and many organists after him learned to play it, too. Other notable works of Dupré's include the Symphonie-Passion, the Esquisses and Évocation, and the Cortège et Litanie.

As well as composing lots of music, Dupré prepared study editions of the organ works of Bach, Handel, Mozart, Liszt, Mendelssohn, Schumann, César Franck, and Alexander Glazunov. He also wrote music for people who were learning to play the organ, and books on how to improvise on the organ.