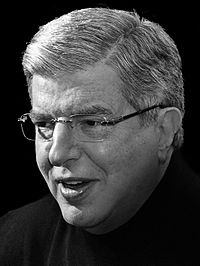 Marvin Frederick Hamlisch (June 2, 1944 – August 6, 2012) was an American composer. He was born in Manhattan, New York City.[1] He arranged the scores of lots of movies, including The Sting and Sophie's Choice. He won an Academy Award, an Emmy Award and a Golden Globe Award, Grammy Awards, a Tony Award and a Pulitzer Prize.[2]

Hamlisch died from respiratory arrest complicated by hypertension in Los Angeles, California on August 6, 2012 at the age of 68.[3]

In 1974, Hamlisch became the second person to win three Academy Awards in the same evening, following Billy Wilder in 1961.