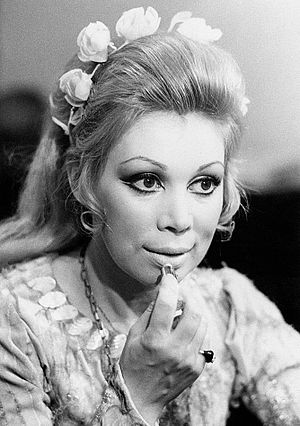 Mirella Freni (born on February 27, 1935) is an Italian soprano, one of the leading lyric sopranos of her era. She had a beautiful and well-schooled voice and a charming stage presence.

Born Mirella Fregni, in Modena, Italy, she studied at the Bologna Music Conservatory with Ettore Campogalliani. She made her debut in her hometown in 1955, as Micaela in Carmen. That same year, she married pianist Leone Magiera, with whom she had a daughter, whom she called Micaela.

After winning the Viotto vocal competition in 1957, she sang with the Netherlands Opera, then was invited at the Glyndebourne Festival, and the Royal Opera House, Covent Garden in 1961. She made her debut at La Scala in Milan in 1962. Her New York Metropolitan Opera debut came in 1965, as Mimi in La bohème, a role she will remain closely associated with throughout her career. She then sang at most of the great operatic centers ot the world, such as Paris, Chicago, Salzburg, etc.

After her divorce from Magiera, she married Bulgarian bass Nicolai Ghiaurov in 1981.